Research busts the myth that ‘Made in Europe’ means fair, says co-author; east is part of ‘cheap-labour sewing backyard’

Adidas, Primark and Zara are among a host of western brands accused of profiting from a supply chain that pays garment workers in easternEurope and Turkey poverty wages and tramples over their labour rights.

About 3 million workers in countries from Slovakia to Georgia are part of “the cheap-labour sewing backyard for western European fashionbrands”, the Clean Clothes Campaign has claimed, in a damning indictment of some of the fashion world’s leading brands, including luxury labels Prada and Hugo Boss.

A largely female workforce stitching designer dresses and tops for big brands are often forced to do unpaid overtime or give up holidays to guarantee their basic salaries, which are well below subsistence levels, according to the NGO.
Bettina Musiolek, a co-author of the report, said the research busted the myth that “Made in Europe” means fair – a perception, she said, that had deepened since the Rana Plaza factory disaster in Bangladesh.

The group accuses World Cup sponsor Adidas of profiting from the absence of labour rights in Georgia. The German company, which sold €14.5bn of sports kit last year, is alleged to be sourcing clothes from that country, where workers earn just €5 for an eight-hour day. These workers reported intimidating conditions, where they had to ask permission to go the toilet, and were under pressure not to take sick leave.

Adidas said it had “no authorised production in Georgia”. Asked whether it might have unauthorised production, via one of its Turkish contractors, a spokesperson said: “At the Adidas Group, we investigate all complaints we receive and … request the Clean Clothes Campaign to disclose the details about the factories covered by their investigation.”
A spokesperson from Inditex, the Spanish retail firm behind Zara, said it too was in touch with CCC, so that it could “investigate the claims and take appropriate measures to address them”.

Researchers found workers being paid less than the minimum wage in four countries, including Bulgaria and Romania, both EU members since 2007. In Bulgaria, where almost half the population live below the poverty line, some full-time garment workers take home €129 a month, well short of the 2013 minimum wage, which is €159, and far behind what workers said they needed to have a decent life. In Romania, some full-time workers said they earned €124 a month, €55 short of its minimum wage, €179.

A seamstress working from home in Bulgaria said she was paid €0.45 for the one-hour job of embroidering one blouse, while the going rate for the equally time-consuming task of stitching beads on an H&M top was €0.50.

Workers spoke of a daily struggle for survival, growing their own food, taking out loans and able only to dream of holidays, days out and savings. A Moldovan worker said: “We are lucky: we grow our own vegetables in the village and in the summer that is what we eat. But in the winter life is very hard.”

In Moldova, a six-day week was routine for workers making clothes for companies said to include Primark and Tesco. Only one in three of the factories investigated paid overtime for Saturday work.

In Romania, workers making clothes for Zara and H&M said they could earn the legal minimum wage only by working overtime and in their holidays. Overtime did not appear on payslips.

In Georgia, workers who said they were stitching T-shirts for Adidas reported being under extreme pressure not to take sick leave. They alleged intimidation by management and said inadequate heating and air-conditioning contributed to health problems.

The NGO spoke to 316 workers in 10 countries, and said workers had seen brand labels, which helped to establish the links in the supply chain. But some brands said their role was non-existent or marginal. Tesco said it had stopped buying clothes from Moldova a year ago, and a Primark spokesperson said the company sourced only a tiny percentage of its goods from that country but would “investigate any issues brought to our attention immediately”.

H&M denied allegations that some of its workers earned just €0.50 an hour for embroidering a top. A company statement said: “We believe that it is an outdated view that foreign companies should determine what a living wage is.” It added: “The problem of overtime is not specific to H&M’s suppliers but is one of the most common challenges throughout the textile industry.”

A statement from Hugo Boss said: “Some of the allegations have been clarified in the past. Some of them we cannot associate with our partners.” It declined to comment further without having more detailed information on the factories.

Prada did not respond to requests for comment before the publication deadline. 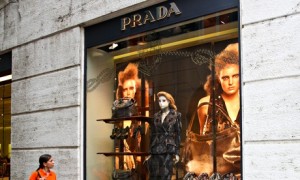