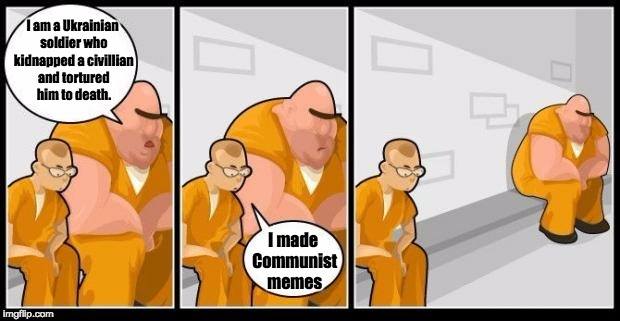 On May 12th, the Artemovsk court in the Donetsk oblast (province), sentenced a soldier to five years of prison with a three year probation period for the kidnapping of a local civilian that resulted in his death. The ruling cited the soldier’s ‘sincere confession and military engagement in the Anti-Terrorist Operations in the East of Ukraine’ as the mitigating circumstances and let him go.

Numerous eyewitness accounts by army colleagues of the convict describe what had happened: The soldier suspected that a local man had ties with the separatists. He proceeded with kidnapping him, putting a bag over his head, brutally interrogating him, inflicting physical damage so severe that the man who spent the night tied up on the floor, was found dead in the morning. His body was then wrapped in a tent and disposed of in a nearby field by a group of soldiers. When the body was found it had decomposed to such a state that it was impossible to establish if the victim’s death was a result of physical violence endured during the ‘passionate’ interrogation. The court then proceeded to make the assumption that the man’s cause of death had been ‘complications from an unidentified prior disease’ that he was unable to get treatment for because he was lying tied up in a Ukrainian military base. This cleared the charges of murder and battery and the court prosecuted the soldier for kidnapping alone. This extremely lenient sentence means that the convicted war criminal will go back to serving in the Ukrainian army knowing that the Ukrainian judicial system will have his back in case he oversteps his boundaries in zealously serving his Motherland. I can only begin to imagine how this news will be interpreted by those still living in the war zone after three years of armed conflict.

Two days before, a Lviv court in the West of the country sentenced a young man to two and a half years of prison with a one year probation period for “using Facebook to spread communist propaganda.” This sentence was also mitigated by the accused’s confession and cooperation with the prosecution. Otherwise he would have faced up to five years in prison for sharing images of Soviet symbols and slogans. Ironically enough, the court has not disclosed what materials the man was sharing, since their publication could also count as communist propaganda, albeit on a larger scale. A copy of Das Capital, however, has been confiscated and is treated as material evidence.

Both of these rulings were made immediately after violent clashes of the far right with those who came out to celebrate Victory Day all over the country and numerous arrests for civilians bearing Soviet war-related flags including a 79 year-old man who put on a USSR T-shirt on May 9. Because WWII symbols have been widely used by pro-Russian sympathizers and Russian media has been quick to amplify the role of May 9 as a stumbling point for two irreconcilable visions of Ukrainian history and its future, the state wanted to maintain a low turnout without the WWII symbols used in Moscow and the unrecognized republics. At the same time, they wanted to keep violence against the largely elderly protesters to a minimum. Unsurprisingly, the ban on traditional symbolism called for reinforcement from the police, which resulted in a series of arrests in addition to police violence against the far right who had threatened to sabotage the march.The PR disaster of Victory Day and last week’s Kafka-esque court rulings demonstrate the current condition of the Ukrainian national project: unable to defeat the enemy in the frontline with the Minsk peace negotiations fallen flat, the government has resorted to, in a typically neoliberal fashion, blaming their own subjects. Since Russia invaded Ukraine on the pretense of protecting the rights of Russian-speakers, the state not only denied any claims of discrimination but also actively engaged in portraying those who voice their discontent with the linguistic policy as separatist-sympathisers, brainwashed by Russian propaganda. Likewise, those unable to adapt to the reality of Ukraine’s post-independence economy in the dilapidated industrial cities, where production fell drastically after the collapse of the Soviet Union, are depicted as insufficiently independent. Their reluctance to partake in the collective euphoria of dreaming about EU-ascension and a liberal democracy is blamed for creating a vacuum for a “Strong leader” which was filled first by Yanukovych and then by Putin’s cronies. This task of reforming its own citizens by fighting the Soviet within them has become one of the current government’s master-projects.

Why else would a court regard a war crime as less severe than a civil crime? Once a Ukrainian citizen becomes suspected of being a separatist or of having pro-Russian sympathies s/he is no longer a civilian victim but an enemy regardless of their degree of involvement in military action (if any). This portrayal of Ukrainian citizens as enemies can take the forms of the blaming of the residents of the unrecognized republics “for nurturing separatism” and the discrimination of IDPs in employment and accommodation rental in continental Ukraine, as well boycotts of allegedly pro-Russian and widely popular TV and radio stations who are believed to turn the citizens into “Russian-loving zombies”. It also results in the glorification and heroisation of those fighting against “the separatist condition” and treating participation in the war as a moral indulgence against war crimes, as the case of the soldier who was given six months probation for raping a minor in the summer of 2016 demonstrates. With the economy in shambles and the IMF-driven austerity putting the burden of the state’s economic flounder on the shoulders of its citizens, the only way for the Ukrainian government to acquire support of the impoverished population is to make them see the current hardships as a temporary setback on its path towards a glorious European future. Paradoxically enough, the state’s fanatical attempts to incorporate “anti-Western” populations into its national project by stripping them of the Soviet is exactly what’s alienating already disengaged citizens and fuelling further anti-government sentiment. With the government unwilling to make concessions concerning its nationalist vision of history, language and identity, the only way to ensure its continued rule is to silence dissent with the help of the repressive apparatus, the powers of which were originally unleashed post-Maidan to “fight the enemies of freedom”, and far-right groups, who, often as “anonymous patriots”, physically assault representatives of political parties whose vision of Ukraine strays from the mainstream pro-European discourse.

The bottom line is, Ukraine is not a democracy. It’s trapped in a vicious cycle of an undeclared war with Russian influence at its border and within itself which, while temporary, feels like forever and is driving the country ever further from the Maidan’s original aspirations of becoming a European country (whatever that might mean).