European Elections in Poland Confirm the Dominance of the Right

The 2014 European elections have confirmed a number of trends in Polish politics. These include a general disillusionment with the political establishment; the dominance of the right in party politics and the weakness of the left in countering this right-wing hegemony. 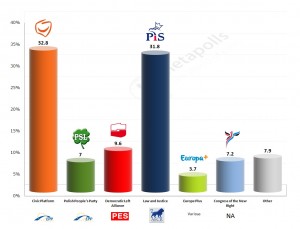 It is hard for any party to claim victory in an election where over 76% of the electorate either did not vote or spoilt their ballot paper.  Although the EU has one of the highest approval ratings in Poland, turnouts in elections are generally low. For almost a decade now the country’s political scene has been dominated by two parties of the conservative right (Citizens’ Platform – PO and Law and Justice Party – PiS). An artificial divide around historical and cultural issues between these parties has formed, with each reliant on the other to mobilise their core electorates. This has helped to enhance political apathy and the sense that there is no alternative to the status quo.

Both of these two right-wing parties ended up virtually neck and neck in the elections, with the ruling PO scoring 32.13% of the vote, narrowly above PiS who gained 31.78%. Compared to the 2009 elections this is a swing to PiS of around 16%. This represents a relative success for PiS and points towards the possibility that it could emerge as the largest party in next year’s parliamentary elections. However, the PiS electorate is traditionally more disciplined in voting than PO voters, which inflates its support when there is such a low turnout.

These elections confirmed that there is currently only one serious electoral party on the Polish left: the Democratic Left Alliance (SLD). The SLD won 9.55% of the vote, above its rival Europe Plus-Your Movement (EP-TR) that scored just 3.58%. EP-TR was an alliance between sections of social democracy with the liberal centre, bringing together the ex-President Aleksander Kwaśniewski and the liberal populist Janusz Palikot. This most probably signals the end of Palikot’s attempt to build a new centre-left party, failing to capitalise on his huge success at the last parliamentary elections when his movement won more votes than the SLD.  EP-TR is the latest failed attempt to build a political current that combines liberal economic with left-wing social cultural policies.

The SLD leadership, around former PM Leszek Miller, has attempted to present the SLD’s result as a success for the party. However, the party won over 300,000 less votes than it had done in the 2009 elections. This confirms how the party has been unable to extend beyond its, naturally diminishing, core electorate and build a serious alternative party to PO and PiS.

Poland is one of the few countries in Europe where there were no candidates connected to the European left slate: GUE/NGL. The only left alternative to the SLD and EP-TR was presented by the Greens. Although they put forward candidates in a number of constituencies and ran an energetic campaign on limited resources, they failed to make any notable breakthrough.

The political party that managed to break onto the political scene was the extreme conservative-liberal party: New Right (NP). NP is led by the maverick Janusz Korwin-Mikke, who has been on the margins of the political scene since the early 1990s. NP combine extreme neo-liberalism, with strong conservative policies on social and cultural issues. As examples, they support the total abolition of state education and in the past Korwin-Mikke has claimed that ‘women only pretend to resist rape’. They are likely to sit with the far-right in the European Parliament, alongside parties such as the French National Front. Although NP’s vote represents a minority of society it indicates a worrying trend in Polish politics, whereby the ideology of liberal individualism is being combined with strong social conservatism. NP won the largest percentage of the vote amongst young people and have replaced Palikot’s party as the new representative of the frustrated young entrepreneur.

The dominance of PO and PiS in Polish politics will continue at least until next year’s general elections. PO will try to mobilise its electorate by repeating its long-used strategy of raising fears about PiS returning to power. In turn PiS will try to mobilise its base in the hope that it can usurp PO as the largest party and form a new government. The rise of NP means that PiS potentially has a new ally on the right that it could enter government with. It is also likely that the SLD will remain as Poland’s sole major party of the left before these elections and hope that by gaining its standard 10% it could possibly enter government with PO.

The fact that over ¾ of the electorate did not participate in these elections shows how the vast majority of society feels no connection to any of the political parties. More urgently than ever there is a need for a new progressive left alternative in Poland. This needs to be based not on competing with the right for the votes of the ‘liberal centre’ but seeking to win the support of the vast majority of society who presently have no political representative. 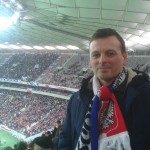 Gavin Rae is a sociologist from Poland. He is author of the book ‘Poland’s Return to Capitalism’ and runs the blog Beyond the Transition.