Reasons behind EuroMaidan Protests in Ukraine 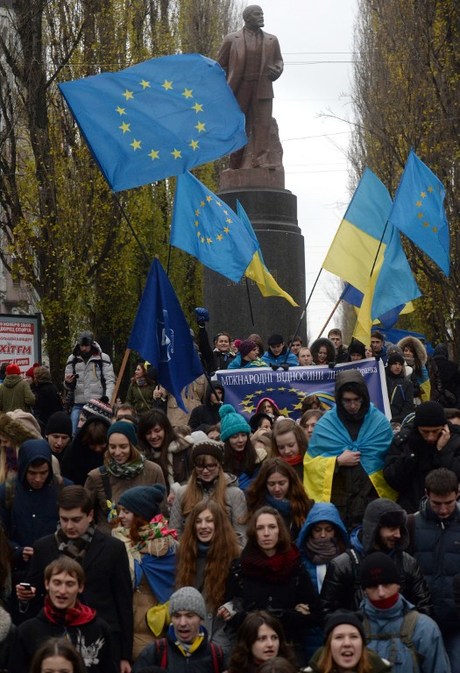 The recent massive social unrests in Ukrainian cities and among the Ukrainian diaspora are structurally comparable to the 2004 “Orange Revolution”. The protests at the dawn of the millennium were due to political elites’ rotation. At that time both presidential candidates clearly adhered to certain foreign-policy orientations in their pre-election statements. Due to lasting geopolitical factors there existed a window of opportunity for an external shift, as opposed to old nomenclatura principles. The former bureaucracy was quite moderate in terms of pursuing the vector of Western liberal reforms. The reasons for that can be found both in the political and the economic sphere. The political reasons are ascribed to the long-lasting legacy of coexistence within the USSR with Russia and other strategic Eastern partners. The economic factors are consequently explained by reference to the intensive trade in commodities between neighboring post-Soviet states.  If we turn to the current situation, the recent social movement called EuroMaidan is due to another foreign policy dilemma that turned out to be a display of the same geopolitical struggle.

Since March 2012, with the Ukraine-EU Association Agreement initiation, the choice of Ukraine’s external orientation has become a zero-sum game for the West and Russia. Economically this definitely lacks a constructive basis, since according to classical logic it’s above all preferable to trade with neighbors. Therefore, choosing one neighbor-option at the expense of the other would simply contradict the comparative advantage principle for Ukraine. In a larger focus, the geopolitical tensions have also been partially alleviated. In March 2013 German-Russian talks regarding the EU visa regime simplification took place. In addition, one can recall Russia’s entry into the WTO in August 2012, which was supported by Germany. The facts thus testify to advantages for the international economic community to opt for an open dialogue with Russia. In that case Ukraine wouldn’t have been an object of struggle between the parties. However, the fact remains that the ultimate choice has to be made between a membership in the EU Association and Customs Union of Belarus, Kazakhstan, and Russia. Providing all the mentioned constraints, this has to do not only with economic outlet, but also with tangible geopolitics.

The mass-media usually concentrate on the internal political dimension of changes among the elites, which always has (in Guy Debord’s sense) a spectacle-society tint. However, every transformation in the sense of a geopolitical switch first of all presupposes compliance with certain economic demands. Both the “Orange Revolution” and EuroMaidan represent a Western-style modernization project. The latter expects market-like changes to break reliance upon centralized planning and productivity based on input increments in favor of technological innovation and openness to FDI (foreign direct investment). Such transformations were induced by the 1989 Washington Consensus originally targeted towards the Latin American states.

The ideological facade of (neo-) liberalism and “the open society” has logically implied fundamental structural conversion within the economic sphere. Its pillars are tight fiscal and loose monetary policy – much in line with the efforts of Thatcherism and Reaganomics to pursue supply-side recovery in their countries. Logically, these actions were executed at the temporary expense of micro-economic performance. The devastating consequences for households in the case of Anglo-Saxon economies have been partially compensated by the new financial possibilities arisen from economic deregulation. Another aspect is that financial markets’ loosening occurs when capitalism exhausts the ways to extract surplus value based on production forces. The remaining liquid source of income is financial speculation and consequent bubble creation.

If one transposes the same plan into Ukrainian realities, one may predictably ask how to refund the households’ losses induced by neoliberal policies in an economy significantly lagging behind OECD standards. The reason for such hypothesizing is the recent IMF report that requests the aforesaid fiscal tightening and monetary loosening as the condition for an EU-Ukraine Association Agreement ratification. Mainly, on a fiscal side, there is “significant upfront increase in gas and heating tariffs for households,” within the monetary realm – low interest rate favorable for inward FDI, and inflation aiming to spur exports. The conditions look precarious first of all for micro-economic performance in terms of depressed demand. If the business and investment support fails to contribute to domestic industries’ competitiveness through a rise in productivity and thereby in increased wages, this can also cause macro-recession. Such fear is based on high local corruption levels (144-th position in the world rating) that can become a serious hindrance for transparent tenders as well as sound public profits from corporate tax-payments.

The other alternative for Ukraine – Customs Union membership – doesn’t promise much improvement either. The recourse-based Russian economy with its comparatively low productivity growth rate cannot facilitate either wages’ growth or advancement in Ukrainian macro-performance. In addition, overstated Russian gas prices for Ukraine have already become the talk of the town. As a consequence, recently the gas has also been imported from Germany and Austria. Considering new foreign policy possibilities that could bring about political change during the 2015 Ukrainian president elections, the Russian-directed foreign vector is quite anachronistic for most of the local voters, not promising any structural plan for the improvement of Ukrainian social standards.

This has probably added much of the credence to the EuroMaidan protesters inspired by the possibility of long-lasting European integration of which they have been temporary deprived after official Kiev suspended the drafting of the Association Agreement. Therefore, since demonstrators aren’t now considering above all the economic conditions of a geopolitical move towards Europe, being attracted by the abstract image of its higher living standards; or at best by the examples of Estonia and Poland’s economic progress. The holding back of the Association Agreement also gives a chance to all opposition parties that continue stressing the priority of state goals over party-based dividends. Consequently, there is some uncertainty as to how the current government would defend its own positions as long as the issue of ex-premier Tymoshenko’s release is no longer a major deadlock for treaty ratification.

Ukraine has found itself double-bound with the necessity to lead dialogue with the West and Russia while facing the possibility that these options are mutually-exclusive. This has been hardly a surprise, but on the eve of the Eastern Partnership Summit in Vilnius the circumstances have suddenly changed. Of course, the IMF claims seem to repeat the ‘successes’ of austerity measures executed upon Greece and Spain in the effort to fight the euro crisis. But at least one can get oneself acquainted with those neo-liberal policies. On contrary, the talks between Ukrainian president Yanukovych and his Russian colleague Putin have been covered by the veil of mystery. Logically, out of two blackmail accusations exchanged over Kiev by the EU and Russia one would rather trust a side which states its own intentions explicitly, however insidious they might actually be. In addition, the potential EU-Ukraine alliance seems to serve as leverage for another elites’ rotation. The EuroMaidan participants are so far satisfied with such motivation.

3 Responses to Reasons behind EuroMaidan Protests in Ukraine