Declaration by Workers and Citizens of the Tuzla Canton

DECLARATION 7 February 2014. Today in Tuzla a new future is being created! The [local] government has submitted its resignation, which means that the first demand of the protestors has been met and that the conditions for solving existing problems have been attained. Accumulated anger and rage are the causes of aggressive behaviour. The attitude of the authorities has created the conditions for anger and rage to escalate.

Now, in this new situation, we wish to direct the anger and rage into the building of a productive and useful system of government. We call on all citizens to support the realization of the following goals:

(1) Maintaining public order and peace in cooperation with citizens, the police and civil protection, in order to avoid any criminalization, politicization, and any manipulation of the protests.

(2) The establishment of a technical government, composed of expert, non-political, uncompromised members. [They should be people] who have held no position at any level of government and would lead the Canton of Tuzla until the 2014 elections. This government should be required to submit weekly plans and reports about its work and to fulfill its proclaimed goals. The work of the government will be followed by all interested citizens.

(3) Resolving, through an expedited procedure, all questions relating to the privatization of the following firms: Dita, Polihem, Poliolhem, Gumara, and Konjuh. The [government] should:

(4) Equalizing the pay of government representatives with the pay of workers in the public and private sector.

(5) Eliminating additional payments to government representatives, in addition to their income, as a result of their participation in commissions, committees and other bodies, as well as other irrational and unjustified forms of compensation beyond those that all employees have a right to.

(6) Eliminating salaries for ministers and eventually other state employees following the termination of their mandates.

This declaration is put forward by the workers and citizens of the Tuzla Canton, for the good of all of us.

(translated from Bosnian by Konstantin Kilibarda) 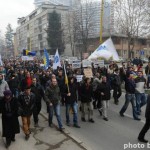