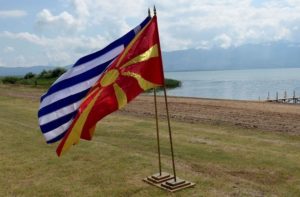 We are publishing this article in collaboration with the online journal Bilten, which has made it available in Serbo-Croatian here.

The month of September has been widely described in Macedonia as a key defining period for the future of the country. The date for the referendum on accepting the Prespa Agreement on changing of the name of the country to the Republic of Northern Macedonia has been set for the 30th of September. The agreement is sought by both governments as a deal that ends the decades-long dispute over the use of the term ‘Macedonia’ and unlocks the country’s path to its NATO membership and EU accession negotiations that were consistently blocked by Greece’s veto.

At the same time, this important period also marks a deep separation in the society. The split between those in favor of the agreement and the ones against it has occupied every sphere of life in the country, from the public domain to everyday conversations. The arguments of both camps range from hysterical warnings of the catastrophe that will ensue if the agreement succeeds or fails the referendum and the parliamentary vote to more cynical views that whatever the outcome of this process, nothing will significantly change in the life of the majority of the population. Supporters of the referendum and the agreement claim that if the deal with Greece fails, the country will remain isolated, will lose its democratization and development perspective and thus enter onto a dangerous path of instability that might even put at risk its sovereignty. On the other hand, those in opposition claim that accepting the agreement and implementing the constitutional amendments for the new name will lead to the erasing of the Macedonian identity of their ethnic group and the creation of a new identity without a history and cultural heritage. They also claim that the position of the Macedonian side in the negotiations was unequal to that of Greece due to the fact that only one side had to make concessions to the wishes of the other.

But, if one carefully reads the agreement, it is clear that the changes relate only to the formal use of the (new) name of the country internally and internationally and not to the naming of the Macedonian ethnic group or the Macedonian language. Indeed, it would be absolutely irrational to engage into negotiations on the right to self-determination of any group in relation to its ethnic identity. The claims of those in opposition to the agreement are grounded on two contradictory arguments. The first is nationalist and the second, anti-imperialist. Claiming that the Macedonian ethnic identity is exclusively linked to the name of the country, they prevent the other ethnic groups in the country from helping to the define its identity, thus this argument is to be opposed as xenophobic and reactionary. The second claim, following the line of those who promote the construction of broader left-wing regional structures, holds that the agreement is reactionary because it has been negotiated under the dictate of the imperial powers of NATO and the EU through “their puppets” in the governments of both countries.

While the first claim needs no further engagement but an outward refusal, the second seems  legitimate when approached from the perspective of joining NATO. The international left as well as other more radical structures should consistently challenge the expansion of military superstructures on every occasion possible, but in the concrete case of the Macedonia-Greece name agreement it is a political misstep to couple it with the country’s joining of the NATO alliance. The dispute on the name of the country is as old as the country itself. The fact that it is being resolved at a time coinciding with the country’s possible NATO membership does not make it by default an imperialist-driven agreement. The name dispute for almost three decades has been exploited by political elites on both sides to maintain their nationalist rhetoric at times when they could not offer any viable economic prospect to their citizens. Not to mention the extreme case of Gruevski’s decade-long rule that had set up the protecting of the name as its main propaganda tool to cover up the gravest abuse of power in the country’s history.

Although at present, the agreement has enraged “patriots” on both sides of the border and has mobilized nationalist sentiment against it, in a long run, it puts to rest all sorts of nationalist claims on both sides and opens up the prospect for much better neighborly relations between the two countries. In this precise sense, as an antinationalist agreement, de-coupled from the NATO and EU processes, the agreement should be praised by the progressive political forces across the region. Mainstream political elites sometimes make ‘good mistakes’ and reach good deals. While it is true that only the Republic of Macedonia had to make concessions – to change its name, it is also true that the new name is more truthful to the historic and geographical reality in the region. The term “Northern” only details more precisely the territory in which the Republic of Macedonia is established. Assigning more symbolic value to the name of a country, should not be a feature of the antinationalist and progressive regional and international left. It is a feature of the nationalists and xenophobic political streams that see their country and its ‘homogenous identity’ as their eternal property, belonging exclusively to them, once and for all.

The current social-democratic-led government as the main actor in the process is actually harming its own positions by a series of political missteps. First, it kept the content of the agreement secret in the course of the negotiations. This provided a terrain for the opposition party VMRO-DPMNE and other nationalist groups to build their own narrative on the content and effects of the agreement. Using their media megastructure built during their period in the government, they spread all sorts of fake news that impacted the general opinion among the people. The government could not engage with the opposition campaign because it had to disclose the real content of the agreement before it was signed. Thus, instead of having a narrative of their own on the positive effects of the agreement, the government is currently struggling to dismantle the demonizing tale of the opposition in the run-up to the referendum.

Second, the very political and legal tools through which the process of the organizing of the referendum is to be conducted remain confusing and, at every step, there is an ad hoc decision being made. This could harm the legitimacy of the process itself. Since it was the parliament that voted the decision to organize a consultative referendum, it turns out that the parliament will run a supportive campaign. Therefore, the government secured state funds for the parliament to support the campaign, funds which would be disbursed to individual MPs.  But, the parliamentary group of VMRO-DPMNE is against the referendum and has called for its boycotting and has refused to receive these funds for its MPs. In the midst of all this legal and political confusion, it seems that a lack of clarity will only harm the governments position and finally support for the referendum.

Third, the question to be presented to the citizens, no matter how it will be put precisely, will include the choice to be in favor of the ‘membership in the EU, NATO and the acceptance of the agreement with Greece’ or against it. This ‘strategy’ of the government has been informed by the large support that EU and NATO membership processes have in the country, thus smuggling the agreement with Greece into the same group seemed to be a smart move. But to the contrary, it has only fueled arguments that the name change is a result of Greece’s threat with a veto and not a progressive political agreement in a region marred with nationalist tensions.

As the date for the referendum is approaching, it becomes clearer that the lack of a serious strategy in both the government and the opposition camp, which beyond the call to boycott doesn’t provide any alternative political vision, will result in a low turnout. In the meantime, an investigation by the Ministry of the Interior is ongoing on possible Russian support to nationalist groups with the aim of causing unrest during the referendum campaign. This has given rise to comments on possible tensions in the country in the run-up to the referendum and it again does not go in favor of a larger turnout. Thus, the whole process will probably return to the parliament where prime minister Zoran Zaev needs to secure a two-thirds majority to pass the required constitutional changes.