Book Review: The Contradictions of Real Socialism (by Michael Lebowitz) 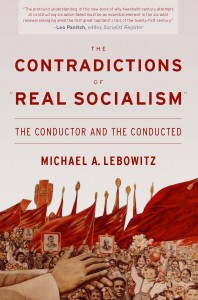 Rather than a historical or dialectical analysis of “actually existing socialism”, ‘The Contradictions of Real Socialism. The Conductor and the Conducted’ should be read more as an exercise in the moral psychology of ‘human development’. For Michael Lebowitz, this should supplement today’s Marxism.

The crucial tenet of this kind of socialism is the idea, nay, the ideal, of human development. According to the author, the main problem with the old theory and practice of Marxism is that it hosts ‘a distortion that forgot about human beings’. Witness the overwhelming importance that the critical analysis of capital displayed by classical Marxism and the scarcity of attention it has paid to the human element of future socialism, that is, to the underlying morals and psychology of the coming new man. Thus, instead of – or, at best, in addition to – staring obsessively at the shifting contradictions of capitalism, we should focus on the requirements needed by the ‘development of a solidarian society, in which we go beyond self-interest and build solidarity through our activity’ and in which we finally ‘replace a focus on selfishness and self-orientation with a focus on community and solidarity’. In short, future socialism rests on the possibility of ‘developing a new common sense’ – and in this task at least Lebowitz undeniably succeeds.

So where does Real Socialism fit into this new old socialist common sense? Obviously, Real Socialism is the supreme example of what can go wrong when socialism cares only for the objective, economic and political side of things and ignores the necessary moral and psychological development of its human element. There is no point in socializing the means of production, if the social structures left in place are still hierarchically biased, according to Lebowitz. The contradiction of real socialism is precisely this: that it attempted to build socialism on the basis of ‘vanguard relations of production’, in which the conductor – the central planners – stood above the conducted – the workers. This ‘despotic character of direction’ maintained in Real Socialism involved a separation between thinking and doing that gravely deformed the potential for human development and, hence, inevitably undermined the proclaimed socialist goal.

In order to ground this new – and yet, as old as it gets – diagnosis of what went wrong in Eastern Europe, Lebowitz promises an analysis of Real Socialism as a system. The usual explanations of Real Socialism and of its failures – state ownership of the means of production, central planning, underdeveloped capitalism, the lack of world revolution – are, claims Lebowitz, merely ‘an entertaining parlor game’. What we need – and what they lack – is an understanding of ‘Real Socialism as a system’. This evidently sounds very promising, but as it turns out, the ‘systematic’ approach to Real Socialism actually translates into an analysis of the way in which the subjective incentives of the main contenders in the sphere of production (central planners, managers, workers) were pitted against each other. This focus on the interplay of subjective incentives has, perhaps, less to do with the dialectic vocation of Marxism than it has with the method of rational choice theory.

In the same way in which Marx started his systematic account in Capital with the analysis of a concrete surface phenomenon, namely, the commodity, Lebowitz approaches the systematic nature of Real Socialism by dealing with an ‘obvious surface phenomenon’ – the ‘shortage economy’. However, even though Janos Kornai (whom, for one reason or another, Lebowitz chooses to follow faithfully all through the volume) also focused on the ‘chronic shortages’ for Real Socialism, the choice of this surface phenomenon as key to the systematic nature of the object of study is rather ungrounded. Marx’s commodity is a concrete element extremely rich in conceptual and historical substrata that practically project almost by themselves the structural axes of the whole systematic perspective. Chronic shortages do not seem to have the same explanatory potential for Real Socialism: they only cover one period – the last decades – in the existence of this social system. In spite of what Lebowitz claims, they were not only the direct expression of the immanent logic of vanguard relations of production, but also, and at least in the same measure, the result of the dynamic of global capitalism (the rise in oil prices and the consequent indebtedness of the communist states). Finally, there’s shortage and shortage: there is the socialist chronic shortage in which everybody is guaranteed a job, paid holidays, free education and healthcare, and yet is confronted with difficulties in finding bread or toilet paper; and there is the capitalist shortage, in which there is, indeed, an abundance of commodities, which nevertheless coexists with chronic shortages in terms of basic subsistence conditions. As it turns out, the reason for choosing this particular surface phenomenon – chronic shortages – as key to the systematic nature of Real Socialism reveals itself once that ‘systematic’ nature is gradually unfolded: practically, the analytical advantage of the shortage economy is that it presents us with a social perspective in which the various subjective incentives of the main politico-economic players can be better grasped because of their persistent mutual opposition. In brief, shortage economy is the original Robinsonade of the moral approach to Real Socialism.

The image projected by this Robinsonade is that of Real Socialism as a contested system traversed by three contrasting subjective logics. First, the logic of the vanguard, that is the paternalist social contract imposed by the central bureaucracy, which promises stability and basic subsistence rights for the workers, in exchange for their submission to the authority of the central conductor. Second, the ‘moral economy’ of the workers, who are willing to accept the commanding stature of the bureaucracy (even with its enforced separation of thinking and doing, and hence the impossibility of genuine human development) as long as it can provide the social contract that it vowed for. And thirdly, the ‘logic of capital’, represented by the managers of state owned enterprises, a logic that becomes more and more articulate and sure of itself as the shortage economy deepens and as the social contract promised by the vanguard is being gradually eroded. Ultimately, of course, the ‘logic of capital’ pushed for by the managers will win: the managers – joined by the economist technocrats – were the only ones capable of articulating their position as a class in itself and thus mount a genuine claim to hegemony. In the name of the ‘consumer’ and with the help of the economists’ discourse, the aggressive agenda of ‘freeing the managers’ from the irrational constraints of a centralized economy paved the way for the smooth capitalist integration of the post-communist countries. However, the fault for all this, according to Lebowitz, lies only with the existing vanguard relations of production: it is only because Real Socialism established a hierarchical command over economy and society, which blocked the path to genuine human development, that the workers – the presumed beneficiaries of this social arrangement – ultimately accepted (even if passively) the dismantling of this paternalist system, and the capitalist rebellion led by the managers succeeded so easily.

The lesson of Real Socialism is now clear: if we do not want to repeat its mistakes, we should abandon vanguard Marxism with its specific vanguard relations of production, and supplement the classical components of socialism (cooperation and common ownership of the means of production) with a vital third element: the ideal and practice of a solidarian society based upon the ‘recognition of our common humanity’, claims Lebowitz. Soviets + electrification + human kindness would then be the revised formula for 21st century socialism.

Now there is nothing inherently wrong with this perspective on Real Socialism – or future socialism in general. However, the merits of this approach are more difficult to track down. As a critical diagnostic of Real socialism, the contradiction between the conducting bureaucracy and the conducted workers has been a recurrent accusation in leftist, humanist, or anarchist readings of 20th-century state socialisms. The specific interplay between the central bureaucracy, the managers and the working class has been analyzed more historically accurate by such authors as Eyal, Szelenyi and Townsley for example. As for Lebowitz’s methodological choice – to focus upon the system of Real Socialism as it was ‘more or less consolidated and stable, rather than on the original emergence of that system’ –, it has the effect of blinding this approach precisely to the historical nature of that social system (that is, the original mixture of conjectural and necessary). Once these historical aspects are left out, the failures of Real Socialism are read as a direct expression of its founding theory (vanguard Marxism) much in the same way in which, in the whole volume, Real Socialism, far from constituting a terrain of materialist investigation, functions more like a punching bag in which the author’s moral intuitions (human development cannot coexist with bosses in production) can be easily punched in.

But the most problematic aspect in Lebowitz’s brand of socialism plus human development has to do precisely with the opportunity of this moral supplement to Marxism. According to Lebowitz, the principal advantage to be derived from this kind of socialism lies in the fact that, by rejecting the separation of thinking and doing, of conducting and following, it does not postulate socialism merely in the future, as a realm of freedom to be reached once the issue of necessity is solved (that is, after an initial stage of state capitalism and central command). Rather, socialism as human development is to be reached and developed immediately as its own practice – the subjective, solidarian disposition is to be born in the midst of its own practical expression.

Is that really the case, however? Following Hugo Chavez, Lebowitz’s triangle of fundamental ingredients of socialism consists of common ownership of the means of production, cooperation in the process of production, and socialist morality (‘the recognition of our common humanity and our needs as members of the human family’). But what is the specific nature of this third, moral element? If it is simply the subjective result of the imposition of the other two, one only has to realize the former and expect to generate the required social morality by means of the new, proper arrangement of the social relations of production. If, instead, the socialist morality will not necessarily emerge as a simple subjective reflection and internalization of the socialist relations of production, then there must be an educator which will inevitably stand above the not-yet socialized working class. In other words, if self-management and socialized means of production are not sufficient for socialism (as was shown by the Yugoslav experience), then there is absolutely no certainty that the socialized working class, left on its own, and even in a socialist context, will not develop a logic of capital, as the managers did in Real Socialism (for example, by seeing themselves as shareholders of their own socialized means of production). Hence, again, the need for the Party at least as a temporary ‘sentimental educator’ of the working class, as a conductor of the temporary socialistically disharmonic orchestra of the conducted. In brief, the moral supplement of human development is at best superfluous, and – at worst – can only reproduce the problems of socialism it claims to solve.