Call For Solidarity With Macedonia’s Protesters 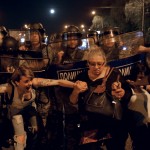 Note from the LeftEast editors: this text coming from citizens, activists and academics concerned by the recent developments in Macedonia, is an attempt to draw attention to the events in the country. It is also a plea for your solidarity with the citizens who are seeking justice and freedom. If you would like your name or that of your organisation to be added to the list of supporters, please write to lefteasteditors@gmail.com, with the following as the subject line: SOLIDARITY WITH MACEDONIA’S PROTESTERS

On Tuesday night (05.05.2015) thousands of citizens of Macedonia protested outside of the government headquarters calling for resignation of the Prime Minister Gruevski and his cabinet. Audio tapes of wiretapped conversations between government officials, which were aired hours before, revealed direct involvement of the Prime Minister and the Minister of Internal Affairs in concealing the truth regarding the murder of a 22-year-old man beaten to death by a police officer while on duty in June 2011. 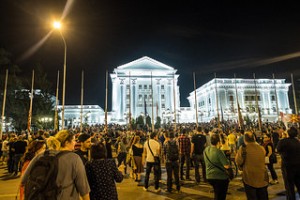 What started off as a peaceful protest against police brutality soon escalated as the protesters broke the police cordon and moved right in front of the government building. Within a couple of hours, hundreds of fully armed special police forces cracked down on the protest using brute force, shock bombs and tear gas to disperse the crowds, and also threatened to use, but eventually refrained from using water cannons. By the end of the police action, dozens of activists were detained – some of them after being chased far into downtown Skopje. In the hunt of protesters, the special police forces even raided a public university library, harassing the students who happened to be there at the time.

As a result of the violent crackdown, a small number of police officers and passers-by, and a higher number of protesters were seriously injured. An estimated number of 40 activists have been detained. Protests have been scheduled to resume every day at 18:00.

Alarmed by Tuesday nights’ indiscriminate use of force by the police forces in Skopje, we fear that the confrontations are likely to escalate further. We have no doubts that Gruevski will resist the calls for resignation and is prepared to push the police forces to tragic extremes in an attempt to maintain his grip on state power and resources. 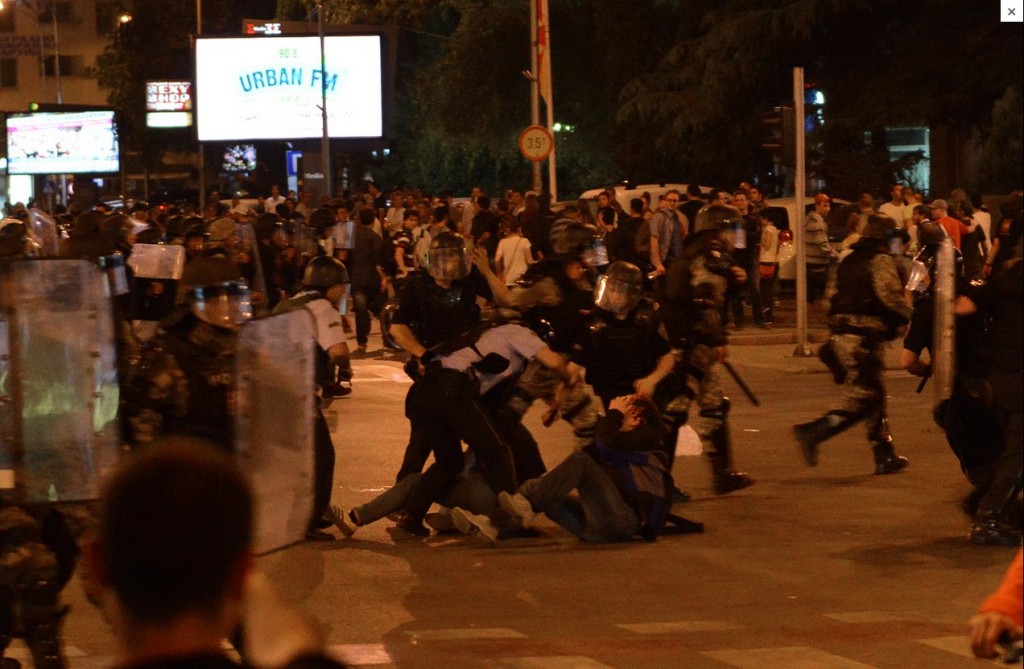 The audiotape which sparked the protest is only the most recent one in a series of leaked wiretaps, which the opposition party the Social Democrats has been broadcasting to the Macedonian public. What began with evidence of the surveillance of over 20,000 citizens orchestrated by the Prime Minister and his cousin, the Chief of the Directorate for Security of Classified Information, Sasho Mijalkov, continued with ever more scandalous revelations. 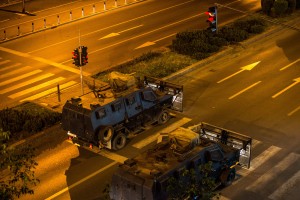 In over 30 sets of leaked wiretaps the conversations revealed election fraud, complete control over the judiciary and media, actions of direct pressures and threats towards non-supporters, embezzlement of vast quantities of public money and public property for private gain, corruption on a massive scale. They have demonstrated how over a period of 9 years, since Gruevski has been in power, the state has been turned into a criminal network fully dedicated to defending the personal interests of the governing elite, their families and friends, and to maintaining a complete system of control of the public through the incessant use of propaganda. The nearly total control over the media has resulted in limited information available to the Macedonian public regarding the wiretapped materials, the protests and the brutality of the police. Social media and a few media portals have been the only sources of information.

We support the protesters’ requests for the resignation of the Government. Moreover, we urge the Macedonian Police Forces to demonstrate solidarity with their citizens, to restrain from the disproportionate use of violence and to refuse any orders that are against the Constitution and in violation of the rights and liberties of the protesters. Finally, we call for an unbiased and professional reporting by national and international media on the ongoing events.

If you would like your name and/or that of your organisation to be added to the list of supporters, please write to lefteasteditors@gmail.com, with the following as the subject line: SOLIDARITY WITH MACEDONIA’S PROTESTERS

Initiative for Democratic Socialism (member of The United Left coalition)

6 Responses to Call For Solidarity With Macedonia’s Protesters