by Jana Tsoneva
The following is the last of three articles by Jana Tsoneva and Stanimir Panayotov on the Bulgarian state’s increasingly harsh rhetoric and policy proposals vis-a-vis the country’s Roma minority. Part I showed that while the discourse is focused on the Roma, the measures proposed will cut social provisions for all poor Bulgarians. Part II‘s main argument is that while Roma have long been the main target of Bulgaria’s nationalists, a narrow liberal conception of humanity may ultimately prove a more powerful force for their dehumanization. While locating this new racial regime in the peculiarities of Boyko Borisov’s new coalition government, Part III traces its genealogy in Bulgaria’s post-1989 party system. – LeftEast editors

This publication has been made in cooperation with the Serbo-Croatian political web portal Bilten.Org 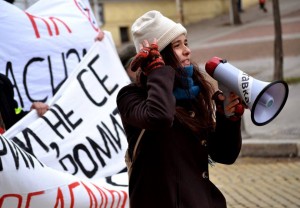 The current governing coalition of liberal and far-right parties in Bulgaria has stirred much controversy. The ideological make up of the coalition partner of the Patriotic Front even prompted a reaction from the EU: the European People’s Party sent a delegation to try to dissuade the prime minister Boyko Borissov (whose party GERB is a member of EPP) from signing a coalition contract with the far-right Patriotic Front. This effort failed as GERB managed to convince the PF to back the governing program even if they will not get any ministerial posts in exchange. Meanwhile, in order to secure parliamentary majority, the two main political parties in the coalition – GERB and the Reform Bloc (itself a coalition of several liberal parties and а conservative [!] party) – solicited the political formation of the ex-president of Bulgaria (2002-2012) Georgi Parvanov (ABV) into the coalition. In what follows I will explain how the racist agenda of the Patriotic Front is on its way of gaining widespread consensus through the intervention of ABV which displaced the policy rationale from the plain of “race” to the plain of “responsibility.” Before that a brief familiarization with the historical context of ABV is needed.

Georgi Parvanov was a president on a mandate of the Bulgarian Socialist Party (2002-2012). During socialism he served as an agent for the Bulgarian secret service. In the immediate aftermath of 1989 he co-founded the All-national Committee for the Protection of the National Interests (OKZNI), a radical nationalist movement whose main agenda was to oppose the Movement for Rights and Liberties (MRL), founded 3 days earlier. MRL is a liberal party representing the sizable Turkish minority in Bulgaria who had just emerged from the terrible ordeal of forced exile following the attempts at “Bulgarianization” via replacement of their Turkish names with Bulgarian in 1984-89, organized by the Communist Party which, from the 1970s onwards, was becoming increasingly conservative.)

OKZNI argued that MRL is “unconstitutional” because it is an “ethnic” political party (an argument which has not lost its universal appeal to this day). OKZNI’s avowed aims was to ban MRL and reverse the national reconciliation process that entailed giving back the Turks their old names and the lifting of the bans on Turkish religious rites.

OKZNI’s anti-Turkish campaign was so aggressive that, fearing the instigation of an ethnic-civil war, BSP’s only recourse was what Gramsci has termed “transformismo” or cooptation of the unruly elements into the status quo. With OKZNI integrated and neutralized, BSP furnished itself with a radical nationalistic wing which, however benign in the larger scheme of things, still exerted ideological influence inside a party that was rapidly becoming a technocratic, pro-business, patriotic entity.

The integration of OKZNI into BSP opened the way for Parvanov to climb the career ladder of the party which he did at breakneck speed. In 1991 he became a member of the executive committee of the party (its supreme governing organ) and only 5 years later he was elected leader of the party. Until 2004 when he signed solemnly the contract of Bulgaria’s admission into NATO, Parvanov was one of the few elite politicians who openly opposed the Euro-Atlantic aspirations of the country.

In 2014 he was kicked out from BSP because when his second term as a President expired, Parvanov created his own political organization – Alternative for a Bulgarian Renaissance (ABV) which claims to embody the social and national values BSP has allegedly betrayed. With open support for education reforms that will split Bulgarians as early as possible into an elite “fit for tertiary education” and “early-specialized manual work force” (the so-called dual system), ABV stands further to the right from BSP.

ABV won 4.2 % on the last general elections, a no small success for a party which competes for the first time in elections. The 2014 elections produced the most “diverse” parliament in the history of elections in Bulgaria – 8 parties overcame the 4% threshold which ushered in a protracted, nearly month-long period of negotiations between the “winner” of GERB with only 33% or far from enough to secure majority and the others. The liberal press “predicted” that the most ideologically sound coalition would be between GERB, RB and PF, conveniently burying some of the most striking features of PF’s election program such as the creation of concentration camps for the Roma which would also serve as tourist attractions. Or the openly racist social policy proposal according to which only families with up to three children will receive child benefits whereas those with above three will be given no assistance whatsoever. The underlying racist logic is as follows: it is assumed that the Bulgarian women have between one of two kids whereas the Roma tend to have large families. I will return to this problem shortly.

When GERB proposed to PF, PF agreed to join the cabinet immediately. Later, after some negotiations, GERB and the Reform Bloc (which was established in the peak of anti-governmental protests in 2013 as an explicit opposition both to the ruling BSP-MRL coalition and GERB), also agreed on a common program relatively unproblematically. The common denominator of negatively constituting this coalition seemed to be the total consensus around the “urgency” of removing the Turkish MRL from power). Then when the negotiations finally seemed to be approaching their end, the intervention from EPP occurred and it forced GERB to denounce its ex-future coalition partner of PF and change the terms of their partnership to the one outlined above – no ministerial seats in exchange for their support in Parliament. This necessitated the attraction of a more acceptable coalition partner which ABV came to fulfill. In the ensuing distribution of posts in the executive, Ivaylo Kalfin from ABV was appointed minister for social policy. Kalfin was a minister for foreign affairs (2005-2009) and later presidential nominee from BSP but lost the elections to Rossen Plevneliev from GERB, Bulgaria’s incumbent president.

Kalfin’s first concrete proposal for social policy reform consists of radical restructuring of the social benefits handouts and more specifically, the child benefits scheme. According to the current arrangement, every parent who earns not more than 125 euro monthly is entitled to child benefit of 17 euro montly for the first child, and 25 for the second. Kalfin proposes undermining the universal applicability of the scheme via the ideological operator of “responsibility” which will determine who will be entitled to child benefits. The new policy will mandate that only responsible parents shall be encouraged and supported by the state, whereas the “irresponsible” ones should be negatively incentivized from bearing more children by having their their benefits cut. What Kalfin’s proposal amounts to is nothing less than recasting the PF vision for social welfare in more elegant and acceptable terms by avoiding the potentially unsavoury references to words such as “Roma” and “ghettoes”. A common stereotype in Bulgaria has it that the gypsies (and the poor more generally) are not “responsible” parents; paradoxically, they are responsibilized for their own poverty at the same time by the neoliberal self-help approach to individual well-being (or the lack thereof).

As of yet, Kalfin has not come up with concrete steps to be taken in determining who is a responsible parent and who isn’t. While explicit racial profiling would be too much to swallow, a more “neutral” methodology such as income and monitoring of living conditions springs to mind. Time will show but whatever the methodology, it is already clear that the policy will impact adversely the most vulnerable members of society whose “ethnic” and class status often overlap. They will be deprived of the traditional ways of resisting discrimination since the racist policy will masquerade as the impersonal, abstract and objective credibility statistics will lend it.

The reactions the new policy elicited are symptomatic in that respect. The main liberal newspaper that published the news allows for commentaries under its news entries. That particular news got overwhelmingly approving comments from the paper’s (often extreme) right readership, along the lines of “I can’t believe such a great idea comes from a communist!” (Many people still mistakenly call the BSP and its former and present cadre communists.) The right-wing racists flair pointed unmistakably to the racism informing Kalfin’s polity proposal and embraced it.

We are thus faced with an appalling example of the articulation or synthesis of (neo)liberalism and racism mediated by the notion of “responsibility” which at once masks the racist logic informing the new social policy, while it appeals to pro-austerity Right-wingers entertaining the ideas of “respectable” and “responsible” citizenry vis-a-vis the “parasitic” poor who “breed like rabbits” and for whose pleasure they get to pay.

2 Responses to Bulgaria’s Creeping Apartheid, Part III: Racism with a Touch of Responsibility