by Jana Tsoneva
The following is the first of three articles by Jana Tsoneva and Stanimir Panayotov on the Bulgarian state’s increasingly harsh rhetoric and policy proposals vis-a-vis the country’s Roma minority. Part I shows that while the discourse is focused on the Roma, the measures proposed will cut social provisions for all poor Bulgarians. Part II‘s main argument is that while Roma have long been the main target of Bulgaria’s nationalists, a narrow liberal conception of humanity may ultimately prove a more powerful force for their dehumanization. While locating this new racial regime in the peculiarities of Boyko Borisov’s new coalition government, Part III traces its genealogy in Bulgaria’s post-1989 party system. – LeftEast editors

This publication has been made in cooperation with the Serbo-Croatian political web portal Bilten.Org 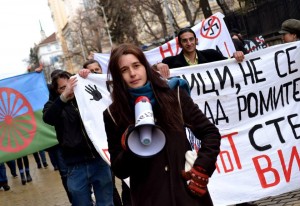 December 21st saw a rare mobilization in Bulgaria: an anti-racism protest that explicitly targeted racism as a supplement to the austerity regime. The protest, a joint effort of Bulgarian and Roma activists, happened in spite of the many verbal attacks visited upon the organizers and attendees, and in the face of a planned but prevented physical assault by a hundred neo-nazis. The immediate causes of the protest were two extremely problematic speeches by high-level politicians. Firstly, the health minister Petar Moskov used his facebook profile to break the news that two attacks against ambulances had occurred the day before: one of them allegedly carried out by a group of Roma. He then proceeded to call Roma “wild animals” and “yahoos who have chosen to behave like animals,” therefore ostensibly deserving to be treated like animals and deprived of emergency aid.

The minister is from the most pro-european party of “Reform Bloc” (a coalition partner in the government), which is a conservative-Christian party coalition but also includes many self-avowed liberals. The minister is one of them. His liberalism did not prevent him from attributing collective responsibility for an individual crime and punishing the entire Roma population in Bulgaria.

A couple of days later, the following words were uttered in the Bulgarian parliament by the leader of the far-right Patriotic Front (the other coalition partner of the center-right government): “[the Roma have become] arrogant, presumptuous and ferocious humanoid apes requiring a right to wages without work, seeking pensions for disease without being sick, child benefits for children who play with the pigs on the street, and maternity benefits for women with instincts of street bitches.”

The chairwoman of the parliament did not interrupt this hideous diatribe. The only objection came from the president of the Movement for Rights and Liberties (MRL), a party that claims to represent ethnic minorities in the country. He said that no one is allowed to insult an entire ethnic group, especially so from the tribune of the National Assembly. The main liberal newspaper, however, presented the exchange between the two party leaders as “PF and MRL compare their xenophobia.” The title is unequivocally tilted in favor of the PF leader since it presents the racist position and the objection thereof as equivalent forms of “xenophobia” (!). (Later that day the human rights organization of the Bulgarian Helsinki Committee issued a statement concerning the speech and the same paper published and entitled it in a way that made one understand that the racist remarks were allegedly racist but that’s only according to human rights people). The president of the country, otherwise an incredibly active public figure that had just emerged from the exhaustive country-wide festivities celebrating the 25th anniversary of our “freedom from communist oppression,” has to this day remained silent apropos both speeches. 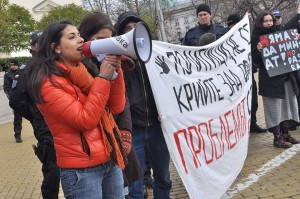 Meanwhile many voices of support for the health minister were raised, including those of the medical workers union. The Reform Bloc supported the health minister but some individual party activists and supporters did not. Loudly at that. Thus when the anti-racist protest was announced its message became popular with people who had previously supported the ruling coalition, even though the protest organizers issued a decidedly left-leaning call-out in which they decried the turning of the state into a state of racial apartheid, that the only scandal bigger than the racist statements of the minister and coalition partner were the existence of ethnic ghettoes and enclaves where dire poverty and marginalization triumph, and explicitly linked racism with austerity. Racism, especially towards the Roma, seems to be the threshold where many a liberal trips over and cannot overcome. But racism seems also to be a vehicle for wedging irreparable ruptures within previously coherent party structures and making it possible to glue together previously incommensurate elements in a popular opposition to state-sanctioned racism.

The protest’s detractors tried to reduce it to yet another instance of the debate “for or against political correctness” but the organizers resisted this attribution and insisted that even if the minister had used politically correct language, they’d still find the substitution of democratic and equal rights (to healthcare, education, etc) with access based on ethnic privilege extremely problematic and no less worthy of sustained opposition. They also pointed out that the issue is not a mere matter of im/politeness since the minister’s words produced alarmingly tangible and practical effects. Thus, according to news reports, emergency aid has started to refuse to dispatch ambulances to Roma communities, including those with no record of attacks against emergency aid vehicles.

The protest also indexed the production of racist ideology to the austerity regime. It was pointed out that shortly after the minister shared his vision on how to fight so-called “Roma criminality,” he announced a series of reforms in the health sector that would limit further access to care. For example, those who have been excluded from the national health insurance scheme for failing to pay their monthly contributions now have the option to return to the system not only by paying back what they owe, but they also have to pay an exorbitant fee of €1000. Since it is mostly poor, unemployed and precariously employed people who are lagging behind with their social security payments, it becomes painfully clear that the new government wants to punish the poor by placing health care for them permanently out of reach. The minister also announced that a bonus scheme is in preparation that will reward general practitioners who limit the issuing of specialist referrals in hospitals. All this with the aim of cutting spending on healthcare. The racist conjuring up and mobilization of the figure of the “parasite” plays a well-calculated role in new rounds of austerity: if the government can convince the public that cutting budgets is necessary in order to “lessen the burden” from the “parasites” (Roma being chief among them) then they will have secured consensus for reforms which necessarily adversely affect everybody, including non-Roma people. (It should be noted that the higher unemployment in Roma communities translates into higher drop-out rates from the state healthcare system. Therefore, the only access to healthcare for many Roma is emergency aid since it legally cannot be denied to anyone).

Thus, the protest had two clearly defined targets: the systemic secretion of racist ideology by the state put in the service of austerity measures, on the one hand, and the use of anti-Roma rhetoric by the state in order to hide its own deficiencies in fulfilling its responsibilities to provide healthcare and security to all citizens, on the other. Because, if the instances of physical attacks against ambulances demonstrate anything, it is not that the Roma (or anybody for that matter, since not only Roma carry out these attacks) are inclined by nature to assault emergency care workers but that the state is failing to provide security, let alone basic social infrastructure. It turned out that the fight that so impressed the health minister had happened because on its way to the patient the ambulance had fallen in a pothole triggering a small car accident, which escalated into a physical confrontation between the ambulance drivers and a motorbiker driving behind them. Similarly, an emergency care doctor complained that since the state cut the budget of the sobering-up rooms in police departments, distressed family members and neighbours have to call an ambulance to pick up a drunkard and they often end up resisting their containment. These are just a few instances of the nexus between austerity and the escalation of violent competition for the remaining social services to which reactionary politicians and media are ready to give racist “explanations.”

In his defense, the health minister Moskov argued that the “state needs to return to the ghetto.” His understanding of such a return was somewhat peculiar: he specified that the ambulances should enter Roma ghettos with police escort. It transpires that the only way he envisages the rebuilding of state-Roma relations is through more policing and criminalization, in short, by upping the “right hand” of the state, while withdrawing even further away its “left hand” through the reforms outlined above. He also added that NGOs who have allegedly benefited from Roma integration programs are spreading libel against him, accusing him of promoting apartheid, implying that the protest is not authentic but paid for. With his deployment of anti-NGO rhetoric that has hitherto been associated with extreme-right conspiracy theorists, Moskov further solidified the elective affinity between liberalism and the far-right built into the ruling coalition. 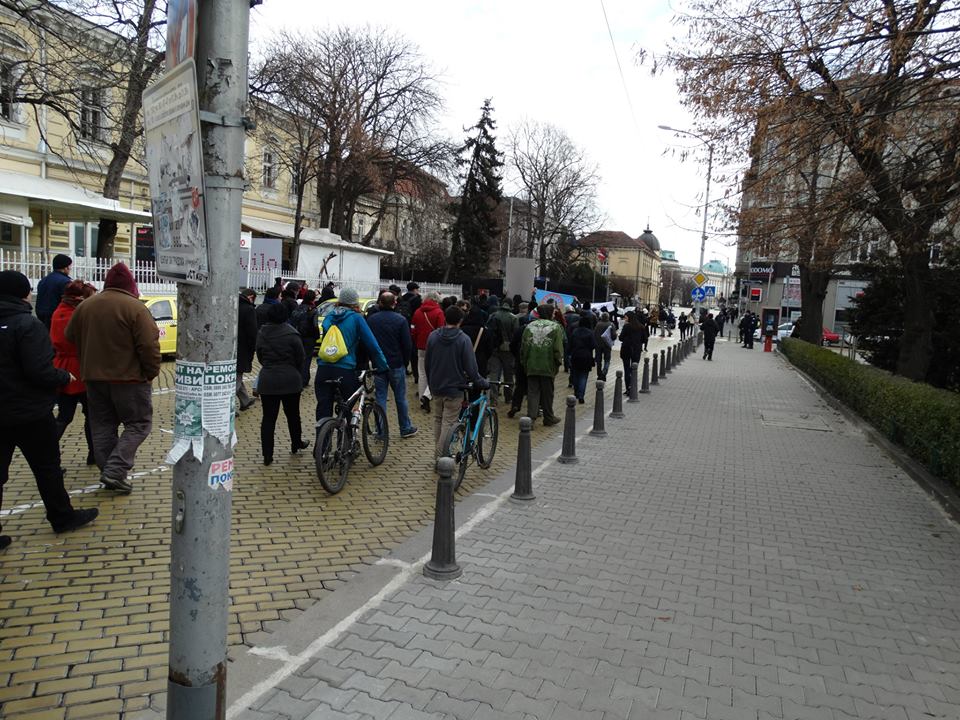