Bulgaria on Greece: Tale of the Virtuous Poor 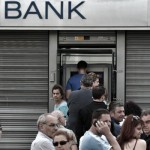 Parents tell children stories to lull them to sleep under the rhythm of feel-good predictability, with the added value of offering a moral formula or two. Children are expected to soak up the latter like sponges and turn into models of good behaviour in due course. Behind the idea of “soaking up” the morality tales told by parental authorities to unsuspecting children is the fear that one might say something obvious like, “The emperor is naked!”

The resonances of Anderson’s fairy tale “The Emperor’s New Clothes” are picked up in Fintan O’Toole’s call for a “reality check” in his Irish Times opinion piece of 30 June 2015, “Who will dare say out loud ‘emperor has no clothes’? The myths about Ireland as Europe’s best behaved state are not harmless lies”. In this O’Toole says what no one seems to be saying about the Irish Taoiseach Enda Kenny’s “extraordinary epistle to the Athenians last week, when he urged Greece to follow Ireland: ‘in Ireland’s case we did not increase income tax; we did not increase VAT; we did not increase PRSI’” – observing that each of these claims was false. But, O’Toole explains:

this truth is utterly irrelevant. Why? Because we all know that the Taoiseach wasn’t making a statement about reality. He was telling a story. […] Ireland’s primary presence on the European stage is as a makey-up story. We don’t live in a country; we live in a narrative, a tale with no more truth content than Cinderella and considerably less than “The Emperor’s New Clothes”./ Our current story is called, according to the Minister for Foreign Affairs Charlie Flanagan, “the pride of Europe”. […] “The Pride of Europe” is a makey-up story that is intended to take the place of the realities it displaces. It’s not a stand-alone narrative. It has an evil twin: Greece. It belongs to a particular genre of fiction: the morality tale. Ireland is the pride of Europe because it is the anti-Greece. We are good because we play along with the bigger stories of the euro zone crisis. Greece is evil because it stopped doing so.

As the government of Greece finds itself unable to pay back the IMF loan and calls a referendum on the bailout-bullying conditions set by the EU, such anxiously spun fairy tales vis-à-vis the “wake-up call” coming from Greece doesn’t stop with Ireland. Much as Ireland is designated the “Pride of Europe”, Bulgaria seems to be cast in the role of the “Virtuous Poor” (with no lesser claim to pride). Consider Andrew Higgins’ article of 29 June 2015 in The New York Times, “Greece’s Troubles Attract Little Sympathy from Poorer Neighbors”.

In this one finds Bulgaria’s president, Rosen Plevneliev allegedly yet believably “deriding Syriza’s complaints that Europe had let Greece down”. He is quoted as admitting Bulgaria’s much poorer (big surprise) status than their neighbour Greece; but nonetheless, he reportedly states with pride, Bulgaria has been able to pursue reforms (to be read as further austerity measures), because, “when you have a problem, you have to address it and not shift it to Brussels or onto somebody else”. For the keen gaze extended from across the Atlantic there are commendable qualities to be read in this. Soldier-on-in-the-face-of-adversity, Higgins and Plevneliev seem to gush in tandem, do-it-yourself-and-be-self-reliant unlike those Greeks. Higgins’s more obvious message is that while poverty might not necessarily be symptomatic of a moral deficiency, “making noise” or actually doing something about it is.

Given the US-EU economic and fiscal interdependencies, opting for elevated moral rhetoric can only be revealing of a deeply seated anxiety about a possible rift in the Eurozone. That has little to do with morals and a lot with vested interests. For someone whose, let’s say, mid-term historical memory is intact, the “good poor” evoked in this instance recalls hawkish Secretary of Defense Donald Rumsfeld’s evocation of “New Europeans” during the build-up of the Iraq invasion in 2003. The context is of course different. The newly-admitted NATO members who in 2003 lent unquestioning support for Bush’s and Rumsfeld’s criminal raiding of Iraq, are in 2015, Higgins observes, “Europe’s most deprived nations, places like Bulgaria, the European Union’s poorest member, and Baltic States blighted by decades of Soviet-imposed penury”. What transpires as similar then and now is the tendency to embrace the hegemonic order of the day, rather than voice dissent or at the very least pose questions of critical relevance to the present.

The views of the President of Bulgaria quoted here do not stand alone. They resonate with views expressed by Bulgarian politicians, journalists, and analysts, including Prime Minister Boiko Borisov’s recommending a “hardline” approach to Greece at the EU summit meeting in Brussels (25 June 2015). Amazingly, such views seem to dominate public opinion in the country, combining a stance of stoic poverty (190 EUR/month salary minimum and 356 EUR/month average in 2015; 257 EUR per capita on pensions, data 2012) with firm belief that the current neoliberal order has nothing to do with it. It seems to be firmly accepted that austerity measures actually work, that lenders’ rights are of paramount importance, and that those rights include absolving lenders from any accountability (responsibility). In contemplating the Bulgarian stance towards Greece now, it also becomes evident that siding with the dominant discourse of berating a “rogue EU member state” also usefully plays alongside the nationalist card of historical rivalries. The idea of “poorer but better Europeans” appeals to these deeply rooted nationalist sensibilities.