Sometimes a Plenum is Just a Plenum: The Role of Intellectuals in Media Coverage of Bosnian Protests (part 1) 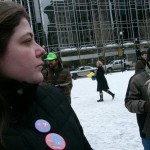 “Always bear in mind that the people are not fighting for ideas, for the things in anyone’s head. They are fighting to win material benefits, to live better and in peace, to see their lives go forward, to guarantee the future of their children.” –Amilcar Cabral

Reading the news tonight (Feb 14), you could perhaps glean that something unusual is going on Bosnia and Herzegovina. Somewhere in between entertainment news, the war in Syria, and the squawking of local political party hacks, there would be a short report about the citizen plenum in Sarajevo or Mostar or Tuzla, or wherever else. You could even perhaps figure out that the people at these meetings are awfully unhappy with their regional governments, but not much more than that. And on the rare occasion that a somewhat longer piece got through the editorial desk, it usually consisted of first impressions by some more famous participants. For example, the prominent actor and kulturtraeger Mladen Jeličić-Troka said about the plenum in Sarajevo: “this was a collective therapy session where everyone could air their grievances and use up some of that adrenalin”; Asim Mujkić claimed that “this form of citizen organizing is promising, and we should keep it as a corrective to the system of parliamentary democracy”; while Srećko Horvat went the furthest, saying that “the protests are not enough on their own. This is why it’s good news that all over Bosnia, plenums were being created, where citizens finally have a chance…to decide their own destiny.” For Horvat, the plenums are therefore “definitely the most important surprise coming out of the protests.” And so, only with Horvat’s commentary did anyone even remember to mention the protests — but alas, only for long enough to declare them less important than the plenum.

There is nothing strange or bad that a professor of political science (Mujkić) or an intellectual like Horvat would see the most value in that which is the most familiar to them: discussions and exchange of opinions in a public meeting. But there is something truly perfidious in the media that found it appropriate to interview intellectuals and cultural workers about the citizens’ plenums, even while a thousand of those citizens — in Sarajevo alone! — showed up and could have been interviewed  — they who used up their “adrenalin” to express just how much this system had humiliated them, denied them basic rights, made them bitter and brought them to the very edge of existence. Because, you see, had they interviewed them, they would have had to show the very thing that was nowhere to be found in yesterday’s news — namely, the deeply class-based nature of this rebellion, the sheer hunger and bitterness of these citizens who came not only for the “collective therapy,” as Jeličić would have it, but in order to transform some of that anger, sadness, and despair into some action for a better tomorrow.  Maybe then the media would also have to show the rather uncomfortable and unrefined expressions of the people who do not have any distance from the anger and social unrest that transformed into violence last week, the distance that highly educated cultural workers and professors whose opinions I was reading last night could have.

In other words, while that past Friday I could hear and read something about the socio-economic problems of workers, students, the unemployed, about the corruption of the entire government system in this state, about the kleptocratic privatization that was enacted over the backs of precisely those workers in Tuzla who brought out all of Bosnia onto the streets — tonight, I couldn’t find any of it. The violence that happened just a week ago was already well past us, present only in so far as we were all distancing ourselves from it, having forgotten, of course, that such violence is only a reaction to the kind of violence perpetrated by this state for over 20 years. And what is more important, that as soon as the violence stopped, so have the government step downs.

Today, we’re all talking about the plenums, but without any context or any idea what these people are doing there and what brought them into that gathering to begin with, or what they are planning as their next step. To make matters worse, no one is questioning the causes or the consequences of this entire rebellion, but rather, most are reflecting on the psychological or the intellectual effects of the gathering itself. Well, damn it, it seems that the buildings of the cantonal governments went up in flames because they wouldn’t let us have plenums earlier!

This is also why, I guess, it didn’t occur to anyone to connect what was happening at the plenum in Sarajevo with today’s strike of all 140 workers of the Holiday hotel; that is, to show how these plenums were set up exactly for the purpose of organizing a more constructive type of rebellion than the spontaneous one that had engulfed all of Bosnia last week, and with such organization, bring about basic changes in this society so that it would no longer be possible for hotel owners to hold 140 workers as slaves for months! It also didn’t occur to anyone to connect the Mostar plenum with the shameful and cowardly attack on Josip Milić, the president of the Union of independent Labor Unions of the Federation of Bosnia and Herzegovina. While fascists with baseball bats understand quite well who, why, and in what way is responsible for the rebellion, such a lesson escapes the Bosnian media. The same is in Tuzla, where you can find dozens of statements by professor Damir Arsenijveć, before you will hear just one interview with the workers of Dita or with some other everyday victims of this system.

What is a plenum and what is its purpose?

Catharsis is important, to literature professors as much as to those who are living the tragedy of “transition” in Bosnia today. OK, let that be one of the functions of the plenum. But the way the media have served up the plenums, it seems like they are a pure idyll of some liberal understanding of democracy, in which, you see, the people came to lead themselves out of trouble, on some magical path akin to the one Alice in Wonderland takes. Except, it’s unclear which way or by what means one should go on such a path.

What is lost in all of that is that a plenum is first and foremost a meeting of citizens, not for the purpose of the meeting itself, but explicitly for some other purpose. These people at plenums were not there to supplement representative democracy, nor were they there to fruitlessly complain – the latter is a sport so well developed in Sarajevo cafés that people don’t need an excuse to engage in it. Those thousand people who showed up tonight at the Youth Hall in Sarajevo came to plan out their next move: the torch had been lit in Tuzla, a week ago; people have been on the streets for 8 days straight; but now that spontaneity has to be organized into a program, into some plan by which they would reach the demands that were read out tonight.

Demands are one thing; the path to their realization something different. And that is precisely the purpose of the plenum: to organize that same crowd on the streets, but what is more important, to find a way to organize the 93% (in the Federation) or 88% (in Bosnia/Herzegovina as a whole) of citizens that support this rebellion privately but are still waiting on the sidelines, fearful or unconvinced that this could possibly work. To organize them to join the protests and a movement that will create some other system that should be more just than the one we have now. But that new system will not fall down from the sky at one of the plenums; rather, the small army that has gathered at the plenums will organize it in the streets and squares of the cities, at workplaces and unions, at universities and high schools, and in the final analysis, in the homes and lives of those silent 88% of Bosnia’s citizens.

So, to return to comrade Cabral from the beginning: People who struggle for something, never struggle just for ideas, the way it might seem to us professors at times; they always and in every case, fight for concrete improvements of their work conditions and life, as well as the work conditions and lives of their compatriots. So, when the next plenum starts in Sarajevo, Tuzla, Mostar, Bihać, etc, remember these regular people and ask them what they think about the whole thing and why they are there. The answers might (un)pleasantly surprise you.