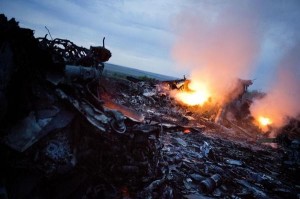 We can say with confidence that the tragedy of Boeing 777, which took the lives of 298 people, has brought the conflict in Eastern Ukraine to a principally new level. Now the main centers of power—Russia, the US, and the EU—must make themselves known and must take the responsibility for stopping the war or conversely—for its practical legitimation and expansion.  Even considering the possibility that the plane was shot down by mistake, it is events of such magnitude that divide history into “before” and “after.” “After” such an event the possibilities of such “strange,” “hybrid,” and other “wars without war” become exhausted.

Over the past several months, as a constant stream of people and weapons passed across the gaping hole of the Russo-Ukrainian border, the nerve centre of the diplomatic struggle between Russia and the West was the question of whether Russia had a sway over the rebels or whether this was an intra-Ukrainian conflict. By giving a different answer to the question, each side could then propose a dramatically different solution: Russia needed a consensus around the idea that Ukraine was undergoing a “civil war,” which could be only ended through the dialogue of the outside parties, who would agree to a division of Ukraine into spheres of influence. The U.S., on the other hand, insisted that the conflict needs to be seen precisely as a form of undeclared but very real intervention by Russia on Ukrainian territory, that is, a variation of good old military operations, of which U.S. itself has a long and established record. A direct consequence of such a conclusion was the not-so-successful strategy of “containing” Russia, the gradual imposition of sanctions and other activities, which could force Putin to “end the war,” which he could end as easily as he began it. Compromises in this struggle to define what is taking place would mean a direct path to defeat for each of the sides.

By the logic of this cynical and cruel diplomatic game, if the tragedy of Boeing 777 had not taken place it would have been necessary to invent it. Evidence of the role of the rebels from the Donetsk People’s Republic (DNR), which will probably be found very soon by the so called “international community”, will probably lead to its designation as a “terrorist organization.” Justifications for the most brutal and destructive measures against “international terrorism” were, as we know, one of trademarks of Putin’s rule. The downing of MH17 will now confront him with the question over support for the DNR, which he can only answer in the affirmative or the negative (in reality, a “yes” should no longer be possible). The point of this message, addressed to a single person, is most clearly expressed in the editorial of yesterday’s issue of The New York Times: “Vladimir Putin can stop this war.”

Can Putin do this in reality? Does he have such a direct control not only over the rebel leaders but also over the regular rank-and-filers? Such questions have now been put in brackets, possibly forever. The space for maneuver Russian foreign policy enjoyed came to a sudden end somewhere over the Donbass region, at a height of 10,000 m.

The question that has remained is as follows: can Putin back down? It is well known that many, both in Russia and abroad, doubt the strength of the reigning regime’s “home front.” Liberals console themselves with the thought that the mirages of propaganda will fade away once the population comes to feel the direct consequences of economic sanctions. Nationalists and some former leftists prophesy a Moscow “anti-Maidan,” that is, a patriotic mobilization, which may turn on Putin if he “betrays Donbass.”

It seems that both underrate the scope of the destructive work conducted since this spring by the Russian state over Russian society. “The New Putin Majority,” cheerfully announced by Kremlin sociologists, seems in the immediate future ready to accept any actions proposed by its rulers. A combination between abstract aggression and fear before the ghosts of instability—these are the impulses governing the majority of our countrymen, who are ready to accept anything as long as the images of war and destruction from their TV screens do not move into their own apartments. It will take a lot of time and patience before the feelings of dignity, the ability for independent thinking, and most importantly, the capacity to fight for their own rights come back to Russia.

(translated from Russian by Rossen Djagalov – original article at OpenLeft.Ru )

Ilya Budraitskis (1981) is a historian, cultural and political activist. Since 2009 he is Ph.D. student at the Institute for World History, Russian Academy of Science, Moscow. In 2001-2004 he organized Russian activists in mobilizations against the G8, in European and World Social Forums. Since 2011 he has been an activist and spokesperson for Russian Socialist Movement.  Member of Editorial board of “Moscow Art Magazine”. Regular contributor to the number of political and cultural websites.