Alexandra Elbakyan: ‘The Fight Against Copyright Cannot Be Apolitical’

Many LeftEast readers–especially among the scientists; students of the humanities are more familiar with LibGen–have no doubt come across or used Sci-hub. It is a project that saves many scientists and students from the domination of corporations owning the property rights of scientific literature. It provides easy and free access to tens of millions of scientific articles. If obtained ‘legally’, each of them can cost the user $20, making scholarship prohibitively expensive for all but the affluent countries and universities able to afford the prohibitively important subscription fees. In the five years of its existence, the Sci-Hub project gained popularity around the world, and has also angered one of the largest publishers, Elsevier, which has launched a court case against it. We sat down to talk with Alexandra Elbakyan, the project’s creator and developer, about the creation of the site, its users and the future of science.

The following interview appeared in Russian on the internet platform of our comrades from September. The interview was conducted by Yuri Dergunov and Alyona Lyasheva and translated from the Russian by Ana Gurau. 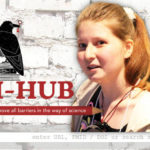 Everyone knows you as the creator of Sci-hub, but tell me what do you do as a scientist?

I studied various questions of neuroscience, and took interest in neuro-computer interfaces. This technology makes it possible to control the mouse on the screen and typing through a special device which is worn on the head. And since I majored in information security, I wondered whether it was possible to use the electric potentials read out on the surface of the head to authenticate the user; whether it was possible to create similar fingerprint technology, and not only for the brain. A database of electroencephalograms that I had developed showed that different people have different signals, therefore such technology had a future. Now I am interested in the history of science, and am looking toward the humanities.

How did the idea to create Sci-hub come about? Were you counting on the fact that it would become so popular when you started?

The project started with an online forum of molecular biology, so when I began working on Sci-hub, it already had an audience. I just created a service for automating the work previously done manually, that is sending out articles to the different users of the forum. As soon as I announced the project on the forum, it became a great success: my post about it gained 300 “Thank yous”, a prototype of the “Like” function. I hadn’t considered its popularity at an international level, but I knew from the outset that it was in demand.

So the initial audience was Russian-speaking?

Indeed. The users were mostly from the former Soviet Union – Russia, Ukraine, but after a while, people from other countries started to get involved. At the beginning, I used to block the United States and some countries in Europe, so as to avoid copyright holders coming across the service, but then I lifted these restrictions.

Why did you remove them and at what stage?

Sometime in 2013. We were prompted to do it by Russian-speaking visitors to the forum, who, for instance, worked in the United States. They found out about the resource, but could not use it, so I decided to lift the blocking.

Do you work by yourself, or do you have a team?

I work alone. When the site started to get media attention, many people wrote me about their impression that the site had been created by some bearded men dressed in jumpers. This is how public opinion was taking shape. One must confront these ideas. 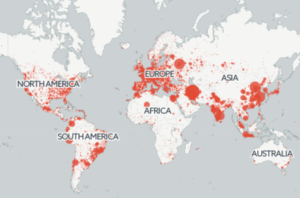 Sci-hub users, an interactive map is available at Science.

Is the fact that the project originated in the former Soviet space a coincidence or rather a pattern?

I think that the need for such a project existed in other countries, such as China and India, and even Iran. It so happened that we started the project, with users in the US and Western Europe.

Why is there such a high number of visits to Sci-hub from countries, where a large number of scientists have access to libraries through the institutions where they work?

Far from everyone has the opportunity to use all the resources. Many universities and colleges offer institutional access only to a limited number of materials. It depends on the contracts concluded between universities and library resources. I have a list of more than 200 universities, through which articles feed in – this is much broader than the usual access of one university. To illustrate: there are scientific magazines, to which only one university subscribes. In addition, a person may not belong to a certain research organization, but they may still need to access scientific literature.

Do your and other similar projects represent steps to make knowledge more accessible, and remove from this sphere the inequality between scientists and the general audience, on the one hand, and that between different regions – on the other? How can these changes transform science itself?

When I conceived the project, I expected that it will be accessed by a wide public that does not have access to research, while assuming that, as a rule, scientists have such access. It turned out that this was not the case: the vast majority of the audience are scientists and students. This is not bad, but my conviction remains that opening scientific research to the public will lead to science being done outside research organizations and centers. For example, individuals or groups, who are not attached to institutions, but who can develop science, making it more creative, as working in any organization, particularly a large one, imposes certain restrictions.

How do you assess the prospects of other non-commercial projects, such as Academia.edu and Researchgate?

These projects provide the opportunity to gain access to articles by requesting them directly from the authors. But not all authors are registered there, therefore they will not be able to put together such a large database as ours.

Turning to the less pleasant aspect of the matter, what is the situation with the lawsuit? How likely is it that the project closes?

This is definitely not going to happen. The most pessimistic scenario is that the project will continue running in the Tor network, where it is very difficult to close anything. As for the conventional internet, we will have to see if they manage to close our domains.

Where are they located?

The main domain is on the Cocos Islands, and there are several more in other countries. Closing even one is a complex bureaucratic process.

How are you affected, personally and in terms of freedom of movement, by the whole story with the lawsuit?

I am not officially banned from entering a certain country, but neither have I tried to travel anywhere. Since the service uses the logins and passwords of various foreign universities, it can lead to arrest and charges for hacking. One must not travel too far: six months ago in Poland they arrested the founder of a large torrent site. This is why I am not traveling to Europe or the US, and I was wary of it even before the lawsuit.

Have you received any reaction from the Kazakh or Russian authorities?

No, not yet. And this is very good.

How about any negative assessment of the project from your colleagues in the field or from someone else?

Yes, sometimes there are negative reviews. But mostly they come from those who do not know what the situation is with regard to scientific publications, and who simply use commonplace rhetoric against online piracy, with questions like ‘and who will pay?’ In general, there have been different responses.

Is publicity a principled choice for you? We recall that the administrators of LibGen are unknown, for example.

In the case of LibGen, this really is their principled position. They even refused to give an interview for the journal Science. On the contrary, I believe that it is necessary to promote these kinds of projects, as opposed to hiding. By hiding, you already position yourself as a criminal. But this is not true: we develop science, we do not commit crimes. In addition, there is also a practical aspect: in order to hide, you must make an effort and spend a lot of energy, especially emotional, so the easiest is not to bother.

Commercial publishers are compelled to transfer into electronic form the books and magazines that came out in the decades before our (digital) era. Would this body of scientific knowledge be available today, if there were no copyright?

If writing on paper created a lot of restrictions earlier, what seriously hinders the dissemination of scientific knowledge nowadays is precisely copyright. If there were no copyright laws, I believe that access to the most diverse scientific literature would be broader, including paper-based books and magazines. For instance, one of my friends came up with the idea to digitize and give open access to all Soviet magazines, but he cannot do it because even Soviet scientific literature is now protected by law. 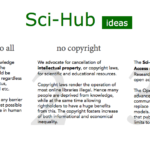 How do you feel about public licenses in the field of intellectual property: GNU Public Licence, Creative Commons? Is it possible to consider them a means of fighting copyright?

Yes, such licenses are a good alternative to copyright, but they have become relatively popular only recently, thus used for a small number of intellectual products, developed only in recent years. But what can be done about the mass of papers published before? Often, the only viable method is piracy.

Does your project carry any political overtones?

Since copyright is located within the legislative sphere, the fight against it is political in any case. In addition, anti-copyright, just as piracy in general, affects the interests of big players, opposes private property, so it cannot not be political.

What are your plans?

I have plenty of them. I want to assemble a complete collection of scientific articles, add to it not only modern science, but also historical manuscripts, such as alchemy, magic – everything that was regarded as science in the past.

I also want to do something similar to what [they do at IBM Watson]. They created an analogue of artificial intelligence and injected in it tens of thousands of scientific articles. Analyzing this collection, the program revealed a number of new proteins, which could be used in the development of drugs against cancer.

The collection of Sci-hub currently has about 60 million scientific articles, they occupy about 50 terabytes. It’s a whole bunch of drives, weighing 25 kilograms. It contains almost all the publications that appeared since articles began to be published digitally. Of those that were published by major publishing houses, Sci-hub collected more than 90%. When the full array of scientific articles is accomplished, it can be processed by means of artificial intelligence research, and thus automatically make scientific discoveries. One person alone cannot read such a vast array of scientific papers, but the machine can, therefore some automation of scientific work is possible, thereby lifting science to a qualitatively new level.

2 Responses to Alexandra Elbakyan: ‘The Fight Against Copyright Cannot Be Apolitical’