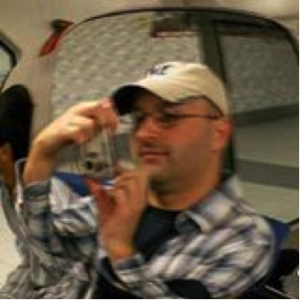 Alek Atevik is working in Skopje. He is an editor of Nova iskra and a member of Marxist Organization Crveni. He is a founding member of Levica, where he is a coordinator of Program Sector Foreign policy, Defense and Security.

LE1: It is interesting to think if, to what extent and how the left in each country has influenced the left in the other. The Greek left has had a formative impact on the Macedonian left- how, if at all, has the fall from grace of Syriza impacted on the Macedonian left? Is that so, and if yes, how is this influence reflected in your conversations, strategies and ways of organising?

Alek Atevik: It is necessary to distinguish the left-wing movement in both countries in the recent period. The Macedonian left was formed after the nightmare of the breakup of Yugoslavia  with the full restoration of capitalism. In this process, the former League of Communists of Yugoslavia played a major role, not as catalyst but as promoter of “free market”, thus beheading the working class of authentic political organization of the masses. The left-wing in Macedonia is still in its germination phase with an absence of a mass labour party and with de facto powerless trade union organizations. The formation of Levica is a positive step only as it stirred the pretty much slimy circumstances and made provocation to depressed activists. It also had negative effect as it showed the degree of strength i.e. weakness of left wing ideologies and detachment from the masses, both with objective and subjective causes. The connection to the Greek left wing is second to none, as much as working class is influencing each other. The party Levica and the left-wing movement in general is left alone or is surviving despite the foreign influences. 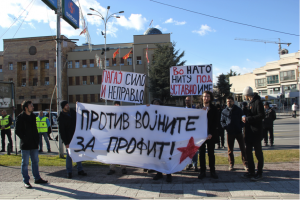 LE2: Recently, the dispute over the name “Macedonia” has re-emerged. We have been informed of squats being burnt down in Thessaloniki following/as part of the nationalist rally; tens of thousands gathered at a nationalist rally in Athens last Sunday. What is behind this re-emergence of nationalism and why do you think it happens now?

A.A: The recent formal trigger is obviously the Macedonian side (the new regime of social democrats of Zaev) that are eager to join NATO. In order to achieve this goal they have to reach an agreement with Greece on the “name issue”. And Zaev is willing to give great concession to Greek nationalists and Western powers just to stay in power.

LE3: How are different Left groups in your countries dealing with the renewed spread of nationalism and the absorption of neo-nazi and fascist tendencies into the current nationalist wave on the name-issue? 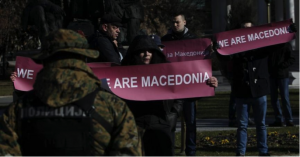 A.A: It would not be accurate to say that there is a spread of nationalism in Macedonia. Nationalism spread its wings from the violent dissolution of Socialist Yugoslavia and remains an active force in the establishment of all political parties. I would even say that nationalists are in decline and people are fed up by their rhetorics. Of course, the declining VMRO-DPMNE is pushing some nationalist line as one resort of gaining popular support, but their socio-economic policies in the past 11 years have shown in full light their servile attitude towards Western imperialism and their ultimate cronyism. We should not be alarmed by the sectarian fascist or clero-fascist groups as they have existed for 30 years. They are not organized enough to be able to grow into a serious societal power. Needless to say, the way to combat them (the nationalist and other deformations) is to form stronger disciplined working class party.

LE4: What is (if any) the spectrum of divergences within the Left in the interpretation/responses to the “Macedonian name” issue?

A.A: The Macedonian side of left-wing politics is opposing any kind of name change as of the principle of self-determination of nations. Those that accept the ultimatum of Greek and Western powers are influenced by the ruling social-democrats, and the reasoning that there is no alternative to EU integration and the state and nation has to obey.

LE5: There have been multiple solidarity actions across the borders- in the theory and praxis of shaping a left critique of neoliberal capitalism, in its application in relation to the Greek austerity crisis, in the interpretation and response to the refugee crisis, and anti-mining struggles across the borders most recently. What is the level of interaction (if any) between the left on the two sides of the border in relation to the name dispute? 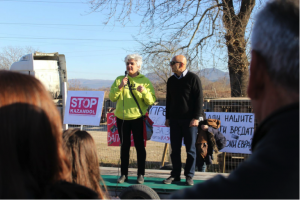 Activists from SOS Halkidiki speak at an anti-mining rally in Valandovo, Macedonia organized by the anti-mining initiative Spas za Valandovo

A.A: You are giving very good examples of interaction between activists. The result of this interaction is very weak and mainly isolated from the population. This just follows from the weakness of our movement. I would like to stress the objective factor of our mutual non-cooperation. The Macedonian left has more connection with more distant Slovenia as we shared the same history. Also, the countries from former almost socialist states have much more in common. In this, I would not exclude the future collaboration of Macedonian and Greek socialists or communists.

LE6: What do you see as the central problem behind the name problem, and what is your position on its “resolution”? What would qualify as a positive outcome in your view?

A.A: The central problem behind the name dispute is capitalism i.e. the Greek weak capitalist class and its petty-imperialist ambitions, the remnants from the Greek Civil Wars, the Counter-revolutionary victory and unsolved national questions on the Balkans. The party Levica would expect from left-wing activists to continue their struggle against capitalism and nationalism.

LE7: How do you see the socio-political situations in the two countries evolving?

A.A: Macedonia has developed the capitalism of the periphery to the highest degree – forming deep class antagonisms, mass unemployment, constant flux of immigrants, decline in public education and collapse of public health care system. This frustration have toppled down the authoritarian regime of Gruevski and great expectations are on the table with the new or almost new Government. The trade unions are in lull. The main Parliamentary opposition VMRO-DPMNE is experiencing serious losing of ground, although it will remain the greatest party in opposition. Zaev’s Government, on the other hand, is promoting almost the same economic policies as the predecessors and their absence of strategy is evident. The new Government, even though it won the voters with left-wingish propaganda, it is from day to day proving to be pro-capitalist and their initial support is in decline.

LE8: What do you see as the future of the left in the region?

A.A: Capitalism will bring new challenges for political activists – eventually the new crisis will provoke people to enter politics. The Balkan region will not be passed by. The democratic capacities of left wing organization will be tested as much as their correct strategy towards the masses. The only ones that will survive and grow will be the ones that are dedicated to the formation of political cadres and organizational networks or branches. In this respect, with huge exception in Greece, the Balkan region is lagging behind. We need mass internationalist labour parties in all countries of the region and we need them now. The slogans for Balkan socialist movement should be changed towards “For socialist federation of the Balkans, for a European socialist union”.