Against Clerico-Conservative Counter-Revolution and Academic Careerists 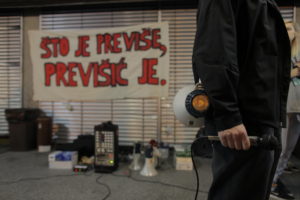 “Vlatko Previšić will go down in history as the worst and the most despised Dean ever! – The dean will fall! – Rector Boras is a disgrace!” are just some of the statements made by students at the University of Zagreb in the course of the past few weeks. During this time an extremely serious situation has been unfolding at the Faculty of Humanities and Social Sciences (Croatian acronym – FFZG). Among the biggest faculties in Zagreb consisted of 23 separate departments and serving more than 6000 students. The situation escalated when the Dean hired a private security company to use as his own private army while maintaining an inexplicable and illegal state of emergency at the Faculty. Most recently, security guards unjustifiably enforced a complete lockdown of the Faculty building in the middle of the exam period, thus preventing a student general assembly (known as “plenum”) from taking place. The following day the guards blocked a hallway that leads to the library, the registrar’s office, and some of the lecture halls in order to stop elected student representatives and others not on the list provided to them by the Dean to access the Faculty Council meeting taking place that morning. Since the situation at the FFZG has been heating up for some time now, it is best to begin at the inception of these developments.

Business as Usual and Influence Peddling

Back in June 2014, Dean Damir Boras managed to manipulate a program of curricular integration of the Faculty of Humanities and Social Sciences (FFZG) with the Catholic Faculty of Theology (KBF) in the last days of his mandate, through the Faculty Council. The Faculty Council meeting was held in late July and the agreement signed by the administration just a few days before the institution was closed for summer break. On top of that, this integration had not even been discussed as a separate item on the Faculty Council meeting agenda, but was mentioned in passing under “Various.” The timing and method of presentation were carefully chosen, for Dean Boras was very familiar with his institution, its students, and the likelihood the integration contract would not be received with praises. His mandate as Dean started during the massive 2009 wave of student occupations, when the Faculty of Humanities and Social Sciences was at the core of Croatian student struggle against commercialization of higher education and it was important to avoid another such mobilization. Still, at the time the question of why the Dean would play with such sensitive and controversial matter remained. 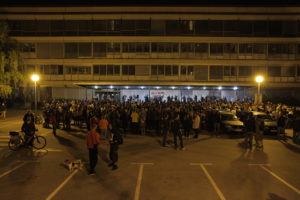 The answer came very soon. Boras was elected Rector of the University three months later with the deciding votes at the University of Zagreb Senate meeting coming from the Catholic Faculty of Theology, leading to the conclusion that the integration contract was traded for these votes. It is also essential to point out that the ambitious Dean did not strike a deal with just any university faculty, but with the institution controlled and managed by the Croatian Catholic Church. The Church, needless to say, has in the post-socialist period risen to the position of a very powerful political actor with a nationalistic and conservative agenda. Nevertheless, at the beginning of the new academic year, when the news of the integration contract broke, strong pressure by professors and students started to build up and the anti-integration initiative ultimately forced the new faculty leadership, now with another right-wing Dean, Vlatko Previšić, to annul all cooperation contracts. For some time it seemed the agreement with the Catholic Faculty of Theology would simply remain another episode of poor judgment by the administration, with an acceptable epilogue.

The Church Strikes Back

However, on the contrary, with the November 2015 parliamentary election and radical change of political climate in the country, most public institutions were affected by the clerico-conservative counter-revolution. After three months of painful negotiations, the new government finally crystallized in the form of a coalition between well-established center-right party (HDZ) and a complete novelty – a post-political, avowedly “non-ideological”, technocratic initiative of independent parliament members (MOST). If this does not sound like a horrible enough combination, it is worth mentioning that on the one hand, HDZ brought to the partnership its recent move towards the hyper-nationalist far-right and its public flirtations with the historical legacy of Croatian fascism. And on the other hand, MOST brought the experience of many of its members who were politically formed in various religious-civic organizations, backed by the Catholic Church, and in initiatives against abortion, sex education in schools, and gay marriage. From day one the new government started aggressively attacking liberal social traditions, legislation, and institutions, particularly the NGO scene and alternative media. It is as if the ministers knew that their government would only last six months before collapsing under the weight of disagreement, individual ambition, and various political affairs. 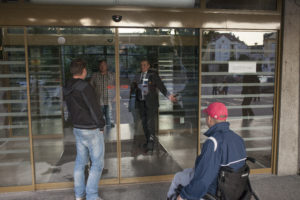 Meanwhile, with the conservative government’s ideological support, Dean Previšić’s faculty administration tried once again to sneak the integration of the Faculty of Humanities and Social Sciences with the Catholic Faculty of Theology in, presenting it on the April 2016 Faculty Council meeting agenda as just one among many other regular contracts the institution signs every year. After a period of fierce discussion and student organizing, the agreement was rejected in one a later Council meeting by the majority of members, and labeled both harmful to the secular nature of the institution, and to the principle of equal access for all students regardless of their background. One of the arguments against the contract, for instance, problematized the fact that the Faculty of Humanities and Social Sciences admits students through a system of entry exams, while students applying for the programs at the Catholic Faculty of Theology also need a church certificate proving they were baptized. It is important to note that because in Croatia Catholic religious classes are an (elective) part of primary and secondary education, students in elementary and high schools therefore also would have Catholic catechists teaching them history, ethics, philosophy, Croatian or foreign languages (due to the FFZG double-major system where catechism could be combined with any of the majors at the Faculty). On top of that, as catechists in Croatian schools are employed on recommendation from the Church, and not through a public job applications competition, catechist teachers would represent unfair competition to other graduates seeking teaching jobs in schools. In other words, with the integration attempt, the Church has found a way to further compromise secularity on all levels of education by fighting for a privileged position for their own cadre in the teaching labor market. 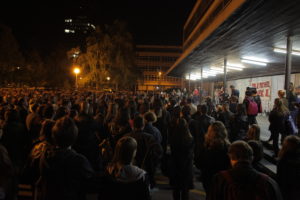 Resistance to the integration contract was organized by the initiative of professors and students acting through the general assembly (plenum) as well as official representative bodies. The Dean responded with threats, by trying to unlawfully remove one of his vice-deans from her position after she publicly spoke against the contract, and by aggressively and illegally manipulating regular Faculty Council procedures. Such developments rapidly mobilized the whole Faculty community to the point at which the majority of the Council members voted for removing Dean Previšić from his position in June 2016. The finalization of his dismissal was supposed to be confirmed in the Faculty Council meeting this September. However, instead of complying with the no confidence vote, the Dean requested that the University Senate dismiss the entire FFZG Student Council for an apparent electoral procedure violation. The Rector and the Senate granted Previšić’s request and student representatives were dismissed on dubious legal grounds. Rector Boras of course had to back Dean Previšić in this situation since the Dean still has to finalize his part of the bargain with regard to the Church. Without students in the Faculty Council, Previšić claimed that the no confidence vote is retroactively invalid has therefore kept his position to date. 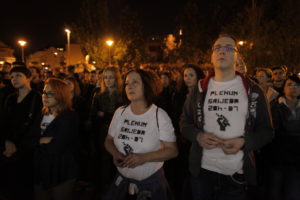 This brings us back to the beginning of the article. After the Student Council was dismissed and the Dean locked the Faculty building in fear of the student plenum and possible occupation, the students organized the plenum in the parking lot outside. The plenum decided to give Dean Previšić until October 3 to step down, or the students will start the strike and occupation of the FFZG building. The following day the majority of the professor Faculty Council members refused to take part in a Council meeting without the dismissed student representatives, broke the quorum and caused an administrative crisis at the Faculty. Soon after, Dean Previšić claimed on public television that he commissioned security guards to defend the institution from possible terrorist attacks, and that everything he is publicly accused of is a political construct against him. The most recent news, coming from a leading mainstream academic trade union, has brought attention to another one of Dean Previšić’s violations against the law. The law requires that a university professor’s contract, together with all his/her mandates, must end in the year they turn 70 (they can, however, be awarded the status of professor emeritus and continue teaching). As Dean Previšić turns 71 this year, he is simply not legally allowed to continue as Dean.

The drama at the Faculty of Humanities and Social Sciences will either find its denouement with the Dean’s departure from the position he holds illegally, or lead to another organized student movement involving strikes and occupations. It is remarkable how far religious structures and their pawns are ready to go in order to resurrect clericalism as a model of government. In the end one simply has to admire the resistance of organized professor and student initiatives because without their struggle this whole story would most probably pass under the radar and end badly. On this note I invite you all to at least send your personal, collective, or institutional letters of support to the students and professors of Zagreb Faculty of Humanities and Socials Sciences whose struggle is still not over yet. (plenum.mediji@gmail.com) 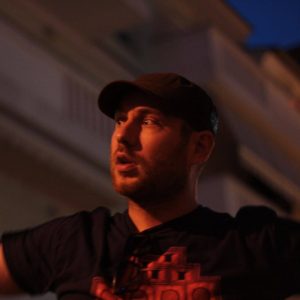 Saša Vejzagić is a PhD student of history, based in Florence, researching technocracy and business elites in socialist Yugoslavia. Over the course of the past eleven years he lived and studied in Budapest and Pula (Croatia) where he was active in various movements, among which was the student struggle against the commercialization of high education. His interests focus on labor and youth movements, and the economic and social history of socialism.