Accumulating the Myths of Lech Wałęsa

This piece by Gavin Rae originally appeared at Beyond the Transition. 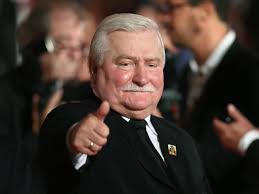 As the news spread around the world about the discovery of new documents, concerning Lech Wałęsa’s alleged collaboration with the Communist authorities, the man himself was addressing the new right-wing parliament in Venezuela. This former trade union leader and avowed champion of democracy and human rights, was supporting the return of the right-wing in Venezuela. He then flew to Miami, to meet Cuban oppositionists and was once again received as a hero. Wałęsa was in his element – the heir of Reagan; the great anti-Communist who had helped to bring down the Soviet Union. Yet at home he was once again being accused of being a Communist agent and the betrayer of the Solidarity movement. Still others defended him as a hero of the nation who had brought freedom and sovereignty to the country. These conflicting narratives have little to do with the actual truth of Wałęsa’s past, but reflect the ongoing conflicts within the Polish elites and the present state of Polish capitalism.

Capitalism has always emerged out of destruction, swindle and usually violence. The Highland clearances; the destruction of indigenous populations; the expropriation of the peasants’ land. In order for capitalism to grow, it not only  needs an initial accumulation of capital but also the creation of a particular social relation. Labourers must be separated from their own means of production and subsistence, whether this be their land or their workshop. Once achieved two groups of commodity holders then come into direct contact with one another. Firstly, are the owners of money, the means of production and subsistence, who are eager to increase the sum of values they possess by buying other people’s labour power. Secondly, are the class of labourers themselves, who must survive primarily by selling their labour on the market. And once achieved, the whole sophisticated machinery of capitalism is set in motion, as it expands into ever wider circles of economic and social life, bringing greater sections of society into this commodity relation.

As capitalism emerged from the womb of ‘really existing socialism’, so a new process of capital accumulation had to occur. This time capital confronted an industrialised economy, with its class of organised labourers. Unlike during the transition from Feudalism, work was already socialised and organised in large factories or offices. However, labour did not exist as a commodity that was freely exchanged on the market. The state’s monopoly control over production and the policy of full-employment, meant that the vast majority of work and economic life was organised outside of market relations.

And in order for the new to flourish, the old had to be destroyed. Throughout Eastern Europe a programme of rapid privatisation and liberalisation was undertaken, producing an economic collapse of unprecedented proportions and a simultaneous increase in poverty and social destitution for millions of people. Simultaneously, private capital began to circulate and expand, creating new found wealth and riches. Often oligarchs grabbed the spoils that were made available, particularly in the countries of the ex-USSR, where the economic collapse was most severe. There was nothing fair or honest in all of this. Corruption, political connections and sometimes brute strength determined who were the winners in this competitive game of expropriation.

Poland did not escape this course of events, although it was less severe than in most other Eastern European countries. The economic collapse was the shortest in the region (the economy ‘only’ shrank by around a quarter between 1989 and 1992) and double digit unemployment, high poverty and inequalities were seen as an inevitable stage of a painful transformation.  Poland’s own creative destruction involved a deep deindustrialisation, with at least two-thirds of the country’s medium and large industrial enterprises collapsing, leading to around 2 million people losing their jobs. This provided the room for international capital to move in and quickly monopolise large areas of the economy. Although this was not an oligarchical capitalism similar to that further east, a new group of the rich and wealthy consolidated itself in the country. And once again there was nothing fair in this. It was often those with the strongest political connections, both within the former Communist and Solidarity elites, that prospered the most.

The advantage for the economic elite in the developed capitalist world is that its theft has long ago been hidden and forgotten. Its original accumulation of wealth submerged in the fog of time as it has passed through the generations. In the ‘post-Communist’ world it is laid bare and continues to be contested. It is this contestation, within the elite, that underlies the latest wranglings over the historical legacy of the former Solidarity leader Lech Wałęsa. Was this the leader of a trade union who led the strikes in that Gdańsk shipyards, that evolved into a social movement of 10 million people and then negotiated the peaceful fall of Communism in Poland, leading to the eventual collapse of the Soviet Union itself? Or rather was he a Communist agent, who took money from the authorities and collaborated with the government in order to sustain the system long enough so that a section of its leaders (in collaboration with the Solidarity elite) could line their pockets once the green shoots of capitalism began to emerge?

Both of these versions of history are accumulated myths, and of the most primitive kind.

For the rest of this essay, head on over to Beyond the Transition…