1918 marked the end of the European civil war but also the emergence of many new states in Eastern and Central Europe. Romania, Serbia and Bulgaria were independent already but Austria, Hungary, Czechoslovakia, Poland and the Baltics emerged anew from the ashes of the Habsburg and Tsarist empires. Today, as ethnocentrism and navel gazing grips the region, the within-region and cross regional comparison of how they fared in the last century of turmoil and calm cycles is urgently needed.

A few weeks ago Cornel Ban (City University of London) and Aurelian Giugal (The Research Institute of the University of Bucharest (ICUB)) launched a few comparative forays into the descriptive statistics that structure the comparative economic and social development of select countries from the region, with Romania, Hungary, Poland (and sometimes Serbia) as the core ECE cases and Portugal, Brazil and Turkey as the cases providing cross-regional insights. While Hungary started from a comparably superior point in 1918, all other cases had roughly similar levels of development. To our knowledge this is the first comparative intra- and inter-regional endeavor that aims for such comparisons across datasets that span up to 100 years.

The vignettes with data will be published by CSD every few days until December 1 first with macro data on GDP and then with core determinants of long-term development: industrialization, export complexity, social development etc.

Onwards to GDP: if we look at GDP per capita expressed in 2011 dollars (figures 1 below) we note the spectacular yearly GDP growth of all these countries during the postwar period, with two spurts in the 1960s and the 2000s. If we take 1920 as a benchmark, the starting point does not anticipate much. Hungary was by far the most prosperous of them and Romania the least, with Turkey doing better than the latter during the interbellum years. During the Cold War both Romania and Hungary experience spectacular catch-up growth so that by 1999 Hungary is still the wealthiest in the pack and Romania overtakes both Turkey and Brazil.

The transformation of real existing socialism into real existing capitalism led to a lost decade for both Romania, Poland and Hungary in the 1990s with a drastic collapse followed by hectic and insubstantial recoveries. The situation is particularly dramatic in Romania, where the lost decade means falling below the GDP figures of both Turkey and Brazil. In contrast, both Portugal, an EU member state sprints ahead in tandem with Turkey until the European financial crisis shaves off some of the Portuguese performance.

As in the case of Portugal during the late 1980s and 1990s, EU membership propels both Romania, Poland and Hungary onto a strong growth path between 2000 and 2008, with the strong recovery after 2011 drastically cutting the gap between them and Portugal, a country whose recovery was much weaker. The Polish record is most striking here, with this country slated to soon overtake Portugal. Although until 2014 Brazil was hailed as a success (BRICS) story, in terms of adjusted output performance it lags behind the two East European economies as well as Turkey, a country whose performance is neck in neck with Romania’s. 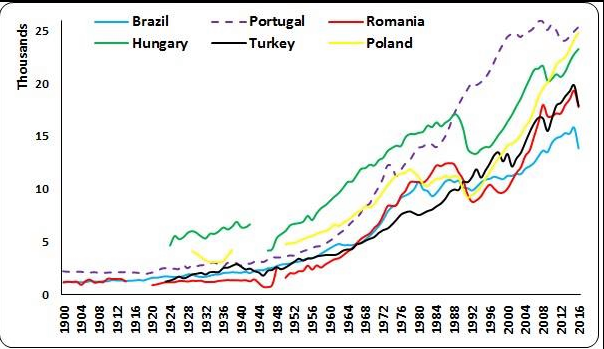